Ludella is separated from the rest of the landing party when exploring an uncharted planet. Her communicator is only getting garbled messages when she tries to inform her captain of the issue, so she decides she might as well get started with her research. She uses her tricorder to scan, not realizing she is being watched by a creature from this planet (POV).

It looks with curiosity at her shapely legs in seamed pantyhose and her panties, which are exposed from her very short uniform when she bends over, giving quite the upskirt view. The creature comes out of the trees to observe her more clarly and it decides to capture her. Ludella catches a glimpse out of the corner of her eye, but before she has a chance to react she is stunned by its phaser. Her knees go weak and she falls limply to the floor with her eyes rolling.

The creature approaches, playing with its new toy’s limp limbs. It pushes one of Ludella’s knees to separate her legs and touches her panties, intrigued by her sex…so differemt from its own kind. The creatures moves her head back and forth and plays with her legs, eventually trying to unzip her boots and take a peek at her curvy calves, but then deciding to wait till it gets her back to its lab to have the boots fully removed.

Back in the lab, the creature has bound Ludella’s wrists above her head and her feet separated and bound to stirrups on an exam table. Her mouth is ballgagged and it has taken her communicator, so she has no way to call for help. It examines her limp bound body before leaving her alone to prepare a serum.

Ludella slowly wakes to find herself bound and gagged. “Where am I?” She asks through the gag. “I’m in some kind of lab…” She realizes what has happened and discovering her binds, she begins to panic. The crew won’t be able to find her! She needs to escape and find her communicator!

She struggles aggressively against her ropes, her adrenaline rushing. Her boots are missing and she wiggles her stocking feet, trying to free her ankles. She wiggles this way and that, her curvaceous figure struggling against the exam table to no avail. She gasps when the creature returns with a syringe. “Please, we come in peace! I was just here to research and document! I swear!” She tries to say through the ballgag, mmphhhing away. The creature either doesn’t understand her, or chooses to ignore her. It seems to be the latter with the way it almost taunts her with the syringe…moving it across her body, looking into her wide pleading eyes. It comes around between her struggling pantyhose legs separated by the stirrups and teases with the needle. Ludella begins to realize the alien’s plans…she’s about to be probed. She begs and pleads throughj her ballgag, but the creature shoves the needle between her legs. She screams and gasps, her eyes rolling and fluttering before she . What does the creature plan next? 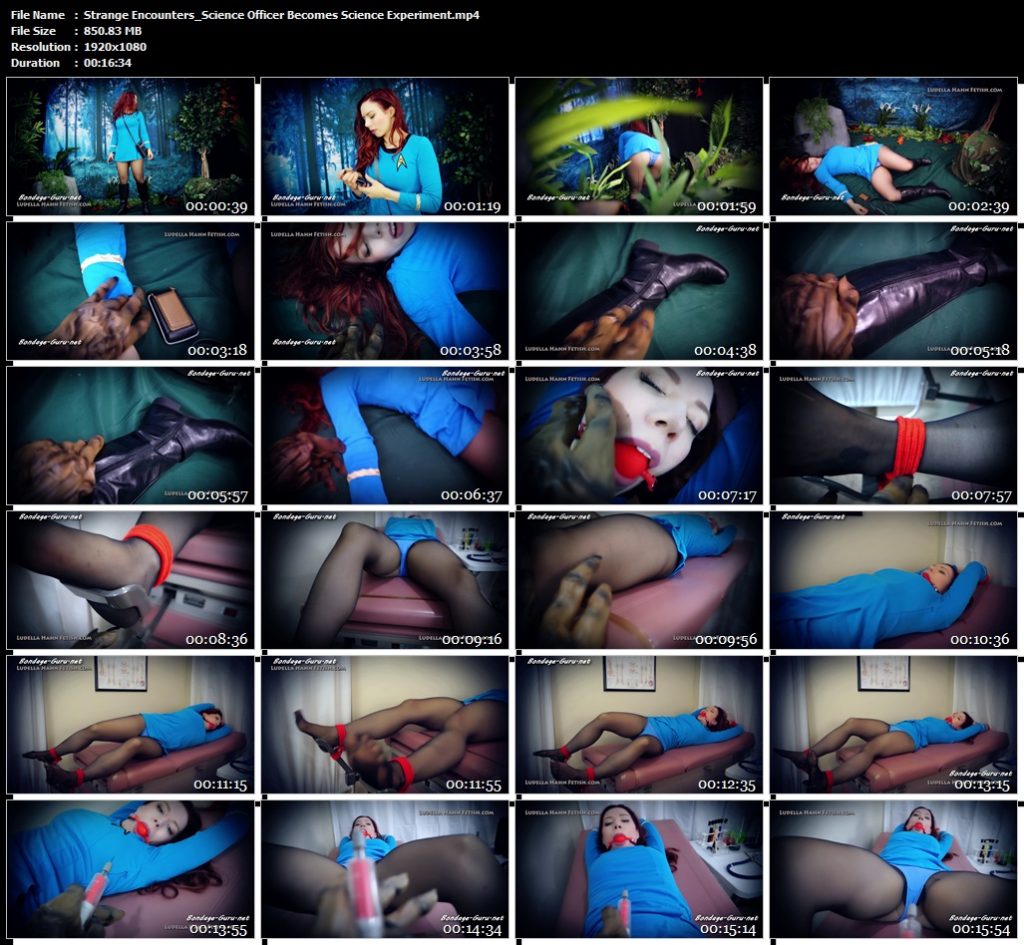 Amelia vs. Her Open Arms – BondageJunkies