It seemed a great idea at the time, secretaries Sandra and Luna decided to get away from their office desks and stretch their legs on their lunch break. Turning a corner, barely noticing the cargo van with it’s side doors wide open, the unwitting women were KO’d… Waking up much later to find themselves tightly tied in their silky shirts and super short skirts, arms up over their heads secured to the van walls! The mysterious malefactor had even muffled the mouths of his MILFy hostages, aggressively gagging with wide vet wrap around their hair, wrapped over a mouth stuffing.

We join the desperate damsels as he rips open their blouses revealing their ravishing racks. Exposed, the big breasted broads begin their bondage journey. Attempting to escape by stretching their way out of their binds, only serves to cause the ropes to tighten, biting into pantyhose covered pussies as the cruel crotch harness digs in, framing each ample ass. The centrifugal force of the van’s turns sends them spinning on their wrist ties, legs stretched out in their high heeled court shoes, cross over one another’s knees, a sweet moment of connection for the curvy captives.

Trying to keep their balance as they are driven high speed through twists and turns,tires the tethered twosome, their struggles lessen, panting chests heaving… They’ll be nicely compliant by the time they arrive at their new home! 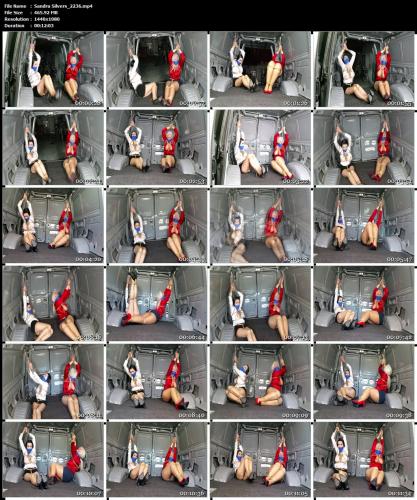 A Trio of Struggling Girdle Bound Damsels in Distress Stretched out AOH in the Warehouse! #1747 HD

Two Taped Secretaries Struggle for Escape as we enjoy Up-Close Views of their Toes, Soles & Tied Feet! #2037 – Sandra Silvers – Please Tie Me Up