Summer was already excited to take on a self-bondage challenge, but she became truly elated when she found out it was a pantyhose challenge! Starting with pantyhose over her head, she stuffs her mouth with a rag and seals it with vinyl tape. Next, she puts her hands in a double layer of pantyhose before handcuffing herself into a hogtie. Knowing the key was only a few meters away, she was fairly confident escape would come easy… at least until she tried to move. While the hogtie was limiting her movement, the real challenge came from the satin corset and pantyhose supplying traction on hardwood floors. After 10 minutes she was only halfway there, but her woes were just beginning. Summer would be in for a surprise when she tried to unlock her cuffs behind her back wearing two layers of pantyhose. 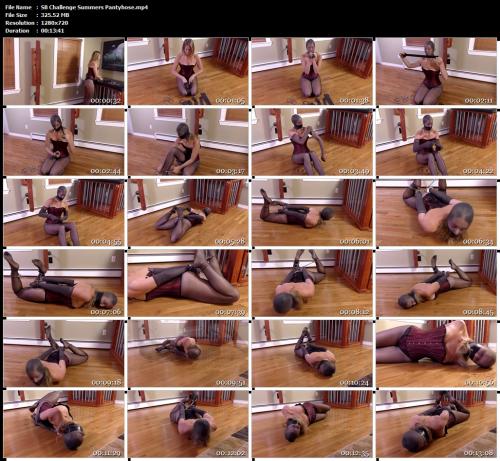 Summer vs. The Job Offer – BondageJunkies

Summer vs. The Conditions – BondageJunkies