The video begins with an answer to the reason there is a problem. And that reason is because they have Pepper the Nanny down in the basement. She is tied up tight with mom’s pantyhose. She demands to be let loose. But her complaints only get her mouth stuffed and taped to gag her. Pepper struggles hard to get loose. When they return to check on her, she thinks they have come to their senses and are going to untie her. But instead, they change the gag by keeping her mouth packed with a pair of mom’s panties and then re-taping her. This time with the tape between her teeth like a cleave gag. Pepper rolls around the floor as she struggles bound and gagged. She thinks that things could not get any worse. But she soon finds out that she is wrong about that. Because after a short while, they have her standing trussed up to an overhead beam. Her skirt is off and her bra is pulled down to expose her tits. They have also changed her gag again. This time with a great big red ball. 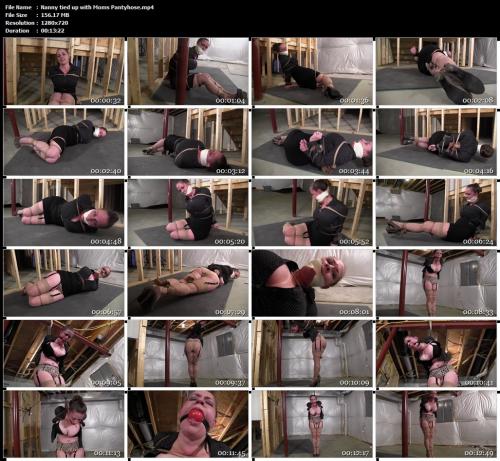 Girl Next Door Bondage – Warned her too late. Now they have her tied up and gagged. – Pepper Sterling

Angry Damsels Bound over and over again Montage HD