Ludella sneaks in the front door at 3am, hours past her curfew. She thinks she might have gotten away with it when someone switches on the lights. It’s her POV stepdad and he is furious. Not only is she hours late, but she’s dressed in a short sundress that barely covers her ass. He admonishes her and sends her to her room.
“I was obviously going there anyway. And you can’t tell me what to do…you’re not my real dad!” She stomps up the stairs, being a real brat, and then slams her door.
After a while, he goes to check on her. She’s talking on the phone to one of the friends whe was just partying with and she’s wearing nothing but a sheer nightie and an itty bitty thong. Strike 3! He enters her room and she hangs up with her friend. “What?” she asks with major attitude. He points out that she can’t dress like that, and again she gets haughty and claims that he can’t tell her what to wear, or what time to be home, or even who she hangs out with because he’s not her real dad. She then starts texting, so he snatches away her phone. Now he’s furious, and she actually looks frightened. He commands her to get on the bed, and she reluctantly obeys. Then he makes her flip onto her stomach. He gets some rope and ties her pretty little wrists together as well as her ankles, then connects them in a hogtie. All the while, she’s gasping, moaning, and grunting. When he’s finished, he tells her to go to sleep and he leaves her bound like that on her bed. “But…but I can’t sleep like this!” She whines.
She struggles to get free from her binds, squirming and moaning and begging to be untied. “Please! Please! If you’ll just untie me, I promise I won’t be naughty anymore! I’ll be a good girl! I promise! Please just untie me!” She continues struggling and begging, even calling him “daddy” in hopes that it will soften her punishment and please him, but after a while of her begging, he just comes back with a ballgag. He pulls her by the hair hard and shoves the gag in her mouth to quiet her up, then he leaves her again, telling her to go to sleep. Poor Ludella is now stuck bound and gagged in her itty bitty nightie and thong for the night, under the complete power of her stepdaddy. 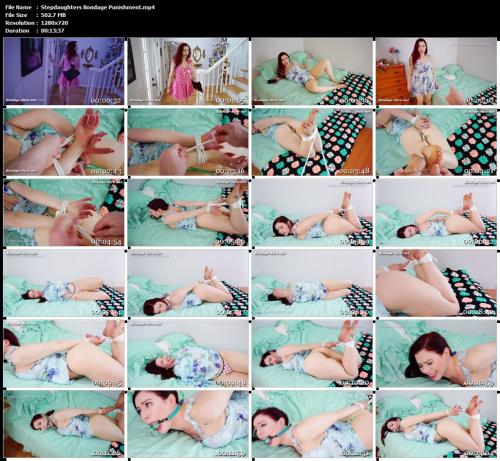