Stunning buxom Karma is all decked out in Christmas elf attire as she has been working during the holiday season as a Santa helper at the local department store. Turns out she was only working there in order to rob the place with her accomplice, but she blew it in a big way. She didn’t turn off all the security cameras and it turns out one of them caught her image and so now the jig is up! Her partner though has decided his only recourse is leave her to take the fall though (talk about a Grinch!). When he gives her the bad news, she’s not too happy as she ends up bound with rope from breasts to ankles. To add insult to injury, he fondles her (for old time’s sake or something!) before he straps in a panel ballgag that very effectively shuts her up. Left alone, she gets to straining against the ropes, hoping to free herself and escape before her erstwhile partner returns. Watching her move about is ridiculously hot, but in bondage it’s off the charts. Somehow, and after a lot of effort, a Christmas miracle happens and she gets free! Quickly working to free herself, she manages to untie her ankle and then shuffles rather quickly to the door, but when she opens it there stands her ex-partner! He isn’t too happy that she is trying to get away when she’s already been pinned for their heist anyway. Shoved back inside, she looks on apprehensively and realizes she’s now going to end up in even more restrictive bondage! 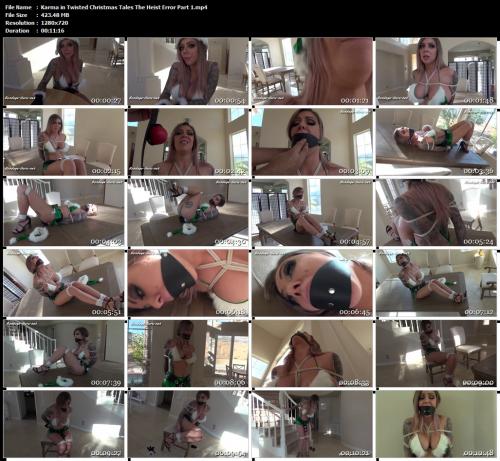 Back to Back – Bondage HD Vids by Limited Audience