Karly Salinas is new in town, and will do anything to become a big movie star. She answers an add in the newspaper, and now finds herself sitting in a strange living room. We hear Nyxon talking to her from behind the camera, asking her what she’s all willing to do to get a part in a major movie. Karly replies that she’ll do absolutely anything, so Nyxon instructs her to stand up, remove her dress, and do a little spin so that Nyxon can check her out. Karly hesitates, but Nyxon reminds her that she just said that she’d do absolutely anything, so Karly removes her dress. Now that she’s down to just her bra, panties, garters & stockings, Nyxon decides to see just how far she’s really willing to go.

The next scene opens up with Karly sitting on the couch, bound in rope. Nyxon asks her how it feels, and as Karly begins to complain, Nyxon reminds her that she told her that she’d do anything to be in a movie. Karly replies that she indeed would do anything, and the scene fades. The final scene opens up with Karly tightly hogtied on the couch with a white ballgag in her mouth. She moans & struggles, and Nyxon tells her that she likes what she sees, but she hasn’t made a decision yet. She’ll have her people call Karly’s people. Karly freaks out & her eyes get wide as she furiously struggles while hogtied on the couch. 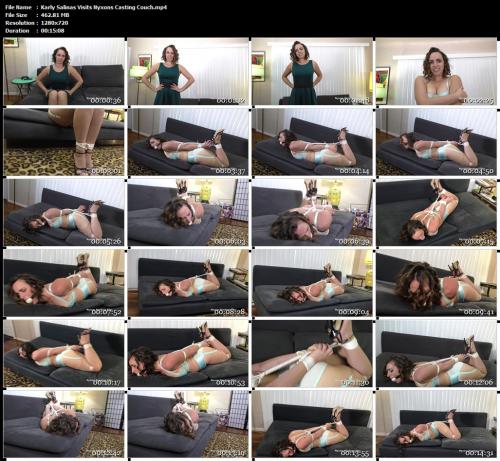 Self Shackled For Self Pleasure – Maria Marley – Captive Chrissy Marie