I want you to show me what Hogtied and Gagged means! – Girl Next Door Bondage

Chichi has asked him to come over so he can help her with something. When he gets there, he finds Chichi in her room wearing only a bra, girdle and stockings. She tells him that she is going to act in a movie and needs help practicing for one scene. In the scene, she is tied up. At first the man questions why she needs his help. “Because I cannot tie myself up!” Chichi explains. A short time later, the man has Chichi tied up. As she struggles in the rope, Chichi realizes that she can hardly move. Then she tells him that she has to be hogtied tied, “Whatever that means!” she questions. “Oh they also mentioned something about being gagged!” Chichi goes on to tell him as if she has no clue what means also. A short time later, Chichi is hogtied on the bed. Her mouth is also stuffed and taped to gag her. Chichi seems very surprised to find herself like this and tries to explain she is not very excited about this idea. But the gag has her unable to talk. She is also disturbed to find the man has also crotch roped her. It turns out, he just added that as something he wanted to try out. As Chichi struggles bound and gagged, the man cannot help but notice just how sexy she is. He tells her she would look much sexier with her bra pulled down. So as Chichi bounces her big tits about, she tries to demand to be untied. The man tell her, he will untie her. But only after she lets him have his way with her while is tied helpless. Chichi nods to let him know he can do whatever he wants to her as long as he unties her right after he is done. 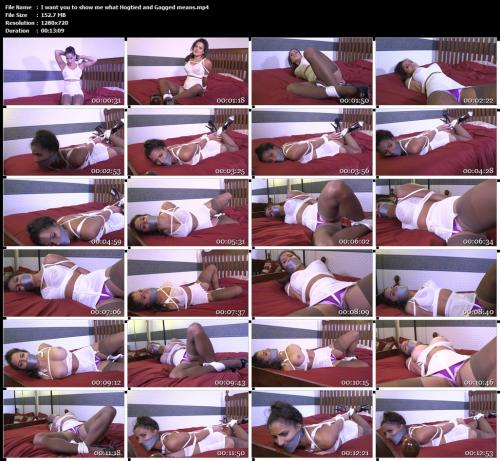 Tied so tight it hurts so good! – Girl Next Door Bondage – Chichi Medina

What is Aunt Carissa doing tied up and gagged in the attic!

Curvy Hotel Nanny-Whatever you do, Do Not let them talk you into playing Cops and Robbers – Girl Next Door Bondage