Chrissy enters a room where the other person is waiting for her already. She is wearing work attire. A long sleeve white satin dress shirt, with a professional looking coat. We know she’s married because she’s wearing a wedding ring. We get the assumption she’s meeting someone on her lunch break. Chrissy had received a letter from the person and she is meeting with them to discuss what was propositioned in that letter.

She sits down at the table and removes her coat as she apologizes for running late. “I wanted to let you know that I read your letter” she says. Chrissy isn’t sultry, nor is she judgmental. She is fairly matter of fact about the whole thing. “I think what you’re asking is very unusual. But I also appreciate you being honest about this. And I’ve put a lot of thought into this and I didn’t make this decision lightly. And I’ve decided I will let you put handcuffs on me.” At this point, Chrissy starts rolling up her sleeves to reveal her wrists. “Reading your letter, I just can’t believe how often you’ve fantasized about my hands. And if this somehow lets you live out your biggest fantasy, I’d like to help.” Chrissy has her elbows on the table, sleeves rolled up, with her hands up at this point. “Well, here they are, the hands you fantasize about, right in front of you. Take a good look.just ready to be handcuffed”

At this point the camera gives us a long look at Chrissy’s hands, until she finally asks “I assume you brought the handcuffs?” The cuffs are placed on the table in front of Chrissy. She stares at them. “You know, I’ve never worn handcuffs before. And the thought of being in these isn’t very appealing. Now, I’m going to let you put these on me, but I want you to realize just how much you’re asking of me. You’re asking a married woman if you can put chains on her.” Chrissy picks up the handcuffs. “So these are them, huh? So this is all you’ve ever wanted, just to see these on my wrists. I don’t understand how you can adore my hands so much, yet want to see them in such a distressed situation. But I’m going to let you see that.” He asks her about her watch and she is surprised. She figured better to not have anything on her wrists before the handcuffs go on. But she has it with her and asks if he wants her to wear it. “So you like watches, too, huh?” Chrissy pulls her watch with a black leather strap out of her bag and straps the watch onto her left wrist.

Chrissy starts to rub her wrists, starting to look a little uncomfortable. “Are you ready? This is your big moment. You’re going to put handcuffs on me, on these wrists. Soak it all in.” At this point Chrissy stands up, turns around, and puts her hands behind her back, palms out. The camera shows us her hands as she waits. “Take your time. Enjoy the moment, my hands aren’t going anywhere. They are just waiting for your handcuffs.” After a bit, we hear the ratchet of a cuff opening. “There it is, I guess it’s coming now. Which wrist will you cuff first? I bet you can’t even decide.” He snaps the cuff around on to her right wrist. “I hope that feels good. Go ahead and tighten it up.” The right handcuff is tightened and the left wrist gets tightly shackled as well. “There they are. My hands that you’ve fantasied so much about, with handcuffs on them. I hope this is what you’ve always wanted. I’ll never understand why you want to see me like this. To see that metal wrapped around my wrists. But here they are.”

After an extended look, we watch Chrissy turn back around to face the camera and sit back down. “Now, the second part of your request I had a harder time with. But I’m going to agree to that, too. Did you bring the ball gag?” The ball gag is put on the table in front of her.” I’ve never even seen one of those before. Let me ask you, have you ever ballgagged a woman before? Yeah, I figured you hadn’t. Handcuffs are one thing, but taking away my ability to speak is a huge thing to ask of me. If you don’t mind, I’d just like to get this part over with. And please put the strap behind my hair, I don’t want it getting stuck. And don’t leave it in very long, this will be very embarrassing for me.” We see the ballgag slowly move toward Chrissy’s mouth. She watches it the entire time, dreading this whole thing. She slowly opens her mouth as it approaches. It’s put in her mouth, and the strap is buckled behind her hair. Chrissy’s reaction to the gag isn’t pouty or desperate. She just looks a little bit annoyed, in a “how long is this going to last and I’m starting to regret this decision” kind of way.

After a while, through the gag Chrissy asks, “Do you have everything you need? I have to get back to work.” But then, in a moment of wanting to be helpful, Chrissy says, “Oh, you know, you can’t see the gag and the handcuffs at the same time, can you? Do you want to put the cuffs on in front of me so you can see both?” Chrissy stands up, turns around, offers up her cuffed hands. The cuffs are removed. She turns around, extends her hands in front, and the cuffs are reapplied. She sits back down and holds her cuffed hands kind of near her mouth. “This is it, get a long look.” Chrissy starts playing with her gagged mouth a bit, running the outline of her lips and the ball with her finger. Finally, she says, “I really need to get back to work now.” She extends her hands, the cuffs are removed. With the gag still on, she starts rolling down her sleeves and says, “I don’t want my coworkers seeing these handcuff marks.” She puts her coat back on then realizes she is still wearing the ballgag. “Oh yeah, I guess you want this gag back.”

Chrissy slowly removes the gag herself. Before she leaves, she says, “I promise I won’t tell anyone about this. But things will always be different between us. You put handcuffs on me. You’ve seen me wearing handcuffs. I can’t just forget about that. But I really do hope you enjoyed seeing those on me. I can’t imagine ever wearing those again.” At this point Chrissy just keeps staring at the handcuffs and gag on the table in front of her. The camera fades out. It then fades back in on Chrissy’s handcuffed hands behind her back again. She’s still wearing her coat, on her way out. She turns around and we see she’s also ballgagged again. She’s then escorted out of the room. This was her idea. 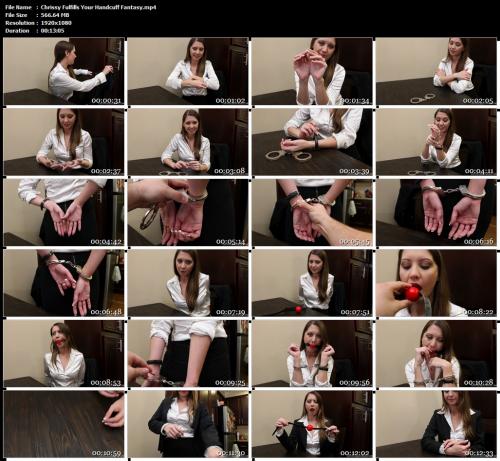