This spectacular bondage fantasy is now bargain priced! In the next thrilling installment of the Action Lady saga, we jump back to the beginning and find out how Carissa Montgomery became the titular adventuress. As the story opens, the original Action Lady, Amber Michaels, has been taken captive by a master criminal and she’s being held post-tied and cleavegagged in his fortified compound. But fearless agents from the Federal Agency for Tactical Enforcement are coming to the rescue! Agent Montgomery has fought her way through guards and traps to find the trussed up defender of justice. But before Carissa can liberate Amber, she’s overpowered by the villains. The next thing the agent knows, she’s been stripped and she’s gagged and bound back-to-back with Action Lady. Through her gag, Amber tells her co-prisoner that it’ll all be over for them if they can’t free themselves within ten minutes. The busty damsels then desperately struggle and squirm against their restraints. After Carissa finds a way for them to escape, Amber offers her rescuer the opportunity to become the new Action Lady, and the rest is legend.

The Black Hoodie’s evil high-tech vibrator has effectively transformed Action Lady into a mermaid! Our buxom damsel now has a fish-tail for legs and she’s ballgagged, roped and cuffed down to a table. The villain gloats as he tells the vanquished crimebuster he intends to sell her to the highest bidder. He goes through a list of Action Lady’s old enemies who have made bids on her, and their plans for her are increasingly terrifying. Left alone, the bound, topless mermaid tries her best to escape from this nightmarish dilemma — but she seems doomed! Will The Black Hoodie have his ultimate revenge?

The story is followed by the next episode of the bondage-packed 1950s-era sitcom parody “Always In Trouble.” “The Phantom of Morningwood Drive” opens in a secret dungeon, and luscious Indica James (dressed in white bra, girdle, stockings, garters, heels and gloves) is tied standing to a ladder by the black-robed villain. She asked her skull-faced captor if he grabbed her because he knows she knows she enjoys bondage, or if he’d seen the amateur photos she’d sent to Mr. Klaw in New York. The Phantom makes no reply but cleavegags Ms. James, and she struggles against her bonds. Later, he changes Indica’s standing position and pulls aside her bra to expose her perky, all-natural breasts. What does he have planned for his sweet hostage next?

Then Mrs. Johnson (Terra Mizu, in a 1950s style dress, heels and short gloves) is confronted at home by the Phantom. At first she believes the intruder is just her husband, Dick, playing a joke on her. When she realizes it’s not him she promptly faints. When she awakens she finds herself cleavegagged and thoroughly bound in a classic position. The sexy housewife energetically squirms against her restraints, but it’s all to no avail! When she tries to wiggle to the phone to call for help, her attempt is thwarted by the reappearance of the Phantom!

Mrs. Johnson is then spirited to the Phantom’s dungeon. The busty beauty is dressed only in a girdle, stockings and lacy panties, and she’s tied with her hands overhead. Her legs are folded lotus-style, and there’s a powerful vibrator fastened at her crotch. She begs for the villain to set her free, but he only straps a bright red ballgag between her lips. The Phantom then switches on the device and she struggles in vain to escape from the influence of the depraved device. But she can’t get away, and the helpless housewife is compelled to have a shuddering orgasm, much to the Phantom’s delight! But could this be what his stunning captive secretly craved as well? 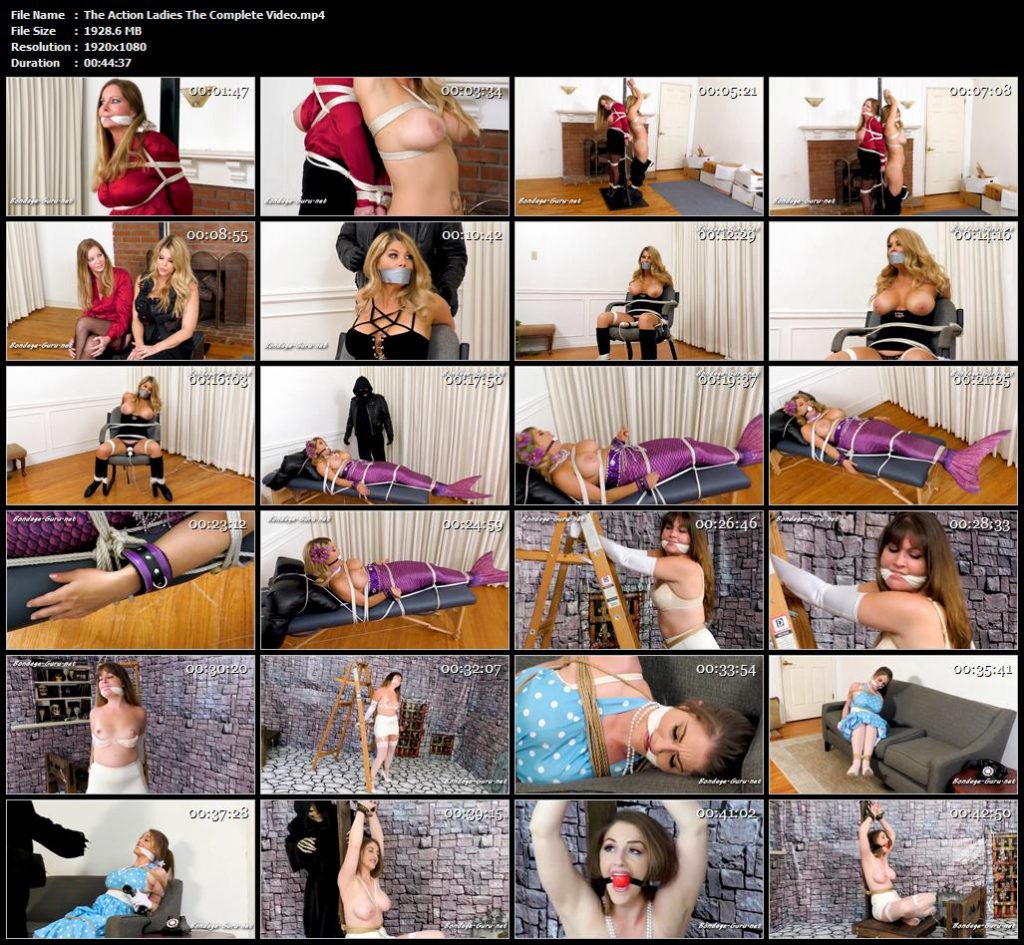 She Was Hogtied With Twine – Brendas Bound Bondage Addictions

Terra Mizu – Taped on the couch