Black Canary is always getting tied up and needing help from Batgirl. She hates asking the bat for help so she goes to Zatanna and asks her to give her some training. Zatanna gets out her magic wand and zap! Canary is suddenly tied up in bondage with a gag in her mouth. Zatanna tells her to struggle and try to get out while she watches her and gives her pointers on how to escape. However, Poison Ivy suddenly appears and catches the superheroines off guard. Ivy laughs and says it must be her lucky day since one of the heroines is already tied up for her. Ivy quickly grabs Zatanna and gives her a big long kiss right on the lips. Zatanna pulls away and goes in for a fight. She connects some good punches at Ivy, but Zatanna soon falls weak from Ivy’s kiss. Ivy grabs Z’s face and give her nice slap that sends her to the floor and . When Zatanna wakes up she is tied up in a chair next to Canary who is also tied to a chair. Zatanna immediately tries to use her magic to free them, but she is gagged tightly and can’t speak a spell. The heroines struggle until Canary is able to free her foot from her boot and use it to undo Zatanna’s gag. Once Z’s mouth is free she says a spell that undoes her ropes. Z is about to free Canary when Ivy sneaks up behind them and blows a mist of sleep gas around them. Z and Canary are both knocked out. When they wake up they are tied up on their knees facing each other. They’re arms are wrapped around each other as if in a close embrace, and they’re wrists are tied to each other’s ankles. Ivy outdid herself with this trap and it looks like these heroines are going to need some help to get out of this bondage! 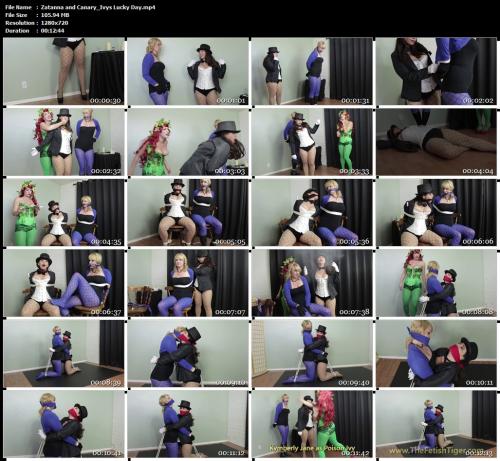