The video begins with Dixie confronting Arabelle with her suspicions. At first she denies everything, but then Dixie provides more evidence in the form of a pair of Arabelle’s panties that she found in her husbands pants pocket. Now Arabelle knows she is in trouble. Suddenly, Dixie grabs Arabelle and starts to tie her up. Arabelle tries to resist, but Dixie is able to over power her and soon she finds herself tied up. Then when Dixie gets tired of listening to Arabelle’s protests, she stuffs the found panties in her mouth and ties a rag between her teeth to gag the little French girl. Not totally helpless, Arabelle is left alone. She struggles hard to get loose, but Dixie has her tightly bound and gagged. Later things get much worse when Dixie returns and pulls Arabelle’s short little skirt off. She also, pulls her blouse open and her bra down so Arabelle’s huge tits can bounce about freely. Finally as an added humiliation, Dixie ties a tight crotch rope between Arabelle’s legs and hogties her. She lets Arabelle know that she will not be meeting her husband tonight as planned because she will be spending the evening with Dixie tied up, gagged and locked in her room. 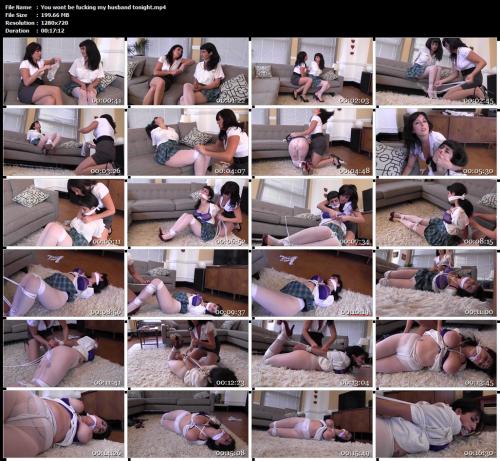