Ultragirl strides into an abandoned warehouse and approaches a bag in the center of the room.
Suddenly an ominous voice comes through the loudspeaker. “Ultragirl, you found our hideout with the virus”
“Well it wasnt very hard to find. Now that I have possession of the virus, I can go ahead and destroy it. Then I’m gonna take you in!” She picks up the bag and starts to exit.
“I think youre in for a BIG suprise.”
Theres a loud crash as Doomsday reveals herself from behind a large stack of crates.
“Destroy Ultragirl!” she says as she takes one huge step after another.
“Am I supposed to be nervous?” not intimidated in the least.
“Very! You have fallen into our trap. Doomsday is going to humiliate you and turn you into our humble servant.”
Ultragirl casually sets down the bag and prepares to fight.
“Good luck Ultragirl…You’ll need it.”
“Luck? Oh no. YOU are gonna need the luck when I destroy this THING of yours and take you to jail.”
And so the fight begins…
Ultragirl quickly finds out she needs more than brute strength to defeat Doomsday as her punches do nothing. She is forced to use her ice breath, sending Doomsday to the floor. She grabs the bag and walks out but the doorknob has been electrified. She yanks herself free and is now visibly irritated.
She searches for another way out as Doomsday regains herself.
Doomsday begins the humiliation…
The fight goes on and on including…
Bearhugs, Back Breakers, Wedgies…
Doomsday places a dampening necklace around her and continues on to the next phase of humiliation.
She exposes her tits and binds her to a column with a heavy chain, gagged and humiliated even more.
She is forced to consume the contents of the bag which will turn her into a mindless slave.
Once finished, Doomsday lands a final blow, sending Ultragirl’s mind into the darkness.
When her vision returns she is dressed in an orange fishnet body stocking with red ballgag and contorted on Doomsday’s grasp.
“Play with Ultragirl!” laughing in delight. She shoves ultragirls face into a white powdery substance over and over again.
Next, her mouth has been forced open with an oral device. A collar around her neck attached to handcuffs that bind her wrists.
The process now complete, she begs for more, getting on all fours. She wiggles her ass in arousal as she gets spanked over and over. 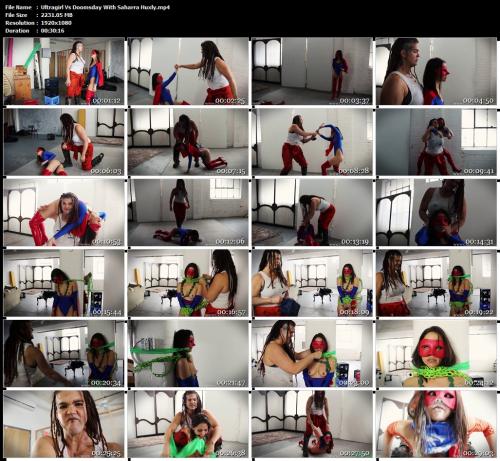 The Cataclysmic 2: The Cat’s Cradle – Cali Logans Power and Peril

Cute secretary tied up at work by a masked woman

Dominica in leather! – Bondage: JJ Plush, Born to be Bound

Delona ties me one night at Boundcon for fun – Bondage: JJ Plush, Born to be Bound