“Casey and Chrissy are girlfriends filming a live webcam show. They ask their viewers to suggest a game for them to play. One of the viewers suggests they do the “What Did She Say Challenge.” Casey asks what that is and Chrissy’s tells her that she thinks it where you put duct tape over your mouth and try talking and the viewers try to guess what they are saying. They are both excited by the idea so Chrissy runs off screen and quickly returns carrying a large roll of gray duct tape. They playfully tape each other’s mouths shut with three long pieces of tape, tightly pressing down and hand gagging each other to make sure it’s secure. Next, they put their hands behind their backs and take turns trying to say sentences. Finally, they slowly peel the tape off of their own mouths and comment about what it was like with tape on their mouths. Chrissy turns to Casey with a wicked smile and confesses that she wants to tape Casey up and play with her. Casey says she would love for her to tape her up. Chrissy tapes her wrists behind her back as Casey teasingly encourages her. Chrissy then stuffs a pair of panties in her mouth and tightly tapes her mouth shut by wrapping it tightly over Casey’s mouth. Chrissy tears off two additional long pieces of tape and applies them to the gag. Chrissy makes Casey lie on her back and tapes her ankles together. Then she begins running her hands over Casey’s body while Casey squirms and moans and eventually clamps her hand over Casey’s taped mouth while teasing her. Chrissy suddenly says that she wants to be taped up too and asks the cameraman if he will help tie her up. She stuffs a pair of panties in her mouth and duct tapes her own mouth shut with three strips of tape. Then, she turns her back to the camera and puts her wrists together behind her back…

Both girls still are now taped up with wrists behind back, ankles, above and below the knees, around their arms/chest above and below breasts. The girls are lying next to each other moaning and rubbing against each other. After a minute, Chrissy gestures to the cameraman and signals for him to take the tape off her mouth. In POV, a hand slowly peels the tape off of Chrissy’s mouth and she spits out the panties. She tells the viewers that she and Casey want to role play with them while they are taped up. She tells the viewers to send them their fantasies and they will act them out. Chrissy reads the first request: They are victims of a home invasion and have been stripped to their underwear and taped up to be kept quiet. Chrissy and Casey immediately fall into character and begin squirming, whimpering and protesting. The cameraman, in POV, stuffs the panties back into Chrissy’s mouth, then does the same wraparound tape gag as Casey. The girls struggle and press their bodies against each other in a protective way and continue gently whimpering and gag talking. But then, the cameraman tells the girls a new request has come in for them to be detectives who have been captured by criminals and stripped of their uniforms. The girls nod their heads eagerly and agree.

Chrissy and Casey are still taped up and gagged exactly as before but they are also each taped to a chair. They have already started their new roles being angry and struggling furiously while making threats and demands to be let go through their gags. They struggle and strain aggressively. After a bit, the girls stop the role play and giggle into their gags and cheerfully bid farewell to their viewers before the video fades.” 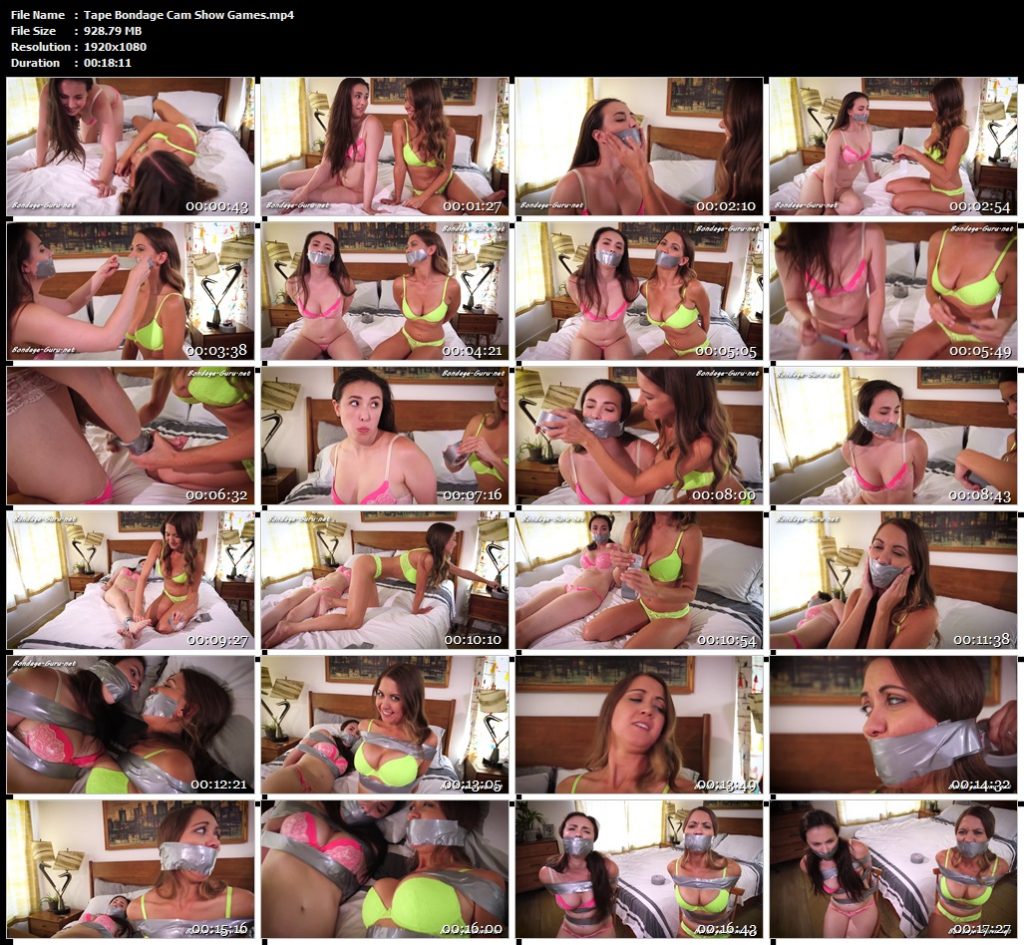