Poor Whitney Morgan comes to me crying about losing her job. Whitney has climbed the corporate ladder using her brains rather than her beauty and unexpectedly she gets fired. Another employee sexy Latina secretary Enchantress Sahrye was recently hired and she flaunts her sexuality and flirts with all the male executives. Sahrye finally managed to whore her way into getting Whitney’s job. We sneak over to her place and wait for her to get home. Beautiful blonde Whitney and I grab the hot bitch in a tight choke hold the minute she walks through the door. I push her down to the floor and she is sure a fiesty slut. She kicks at Whitney and I bend over and put pressure on her neck until her eyes cross. I rope up her arms behind her back cramming her elbows tightly together. Sahrye curses Whitney and I and she doesn’t go down easily, but it’s two against one and we soon gain complete control. Whitney is so pissed off – I tried to help you out on the job you bitch and this is how you repay me by stealing my job. Whitney holds the struggling ethnic girl down and I jam her high heel up against her ass putting Sahrye in a frog tie. Sahrye just won’t quit running her big mouth calling me a guinea and calling Whitney white trash. I tell Whitney to gag the damn brat girl and Whitney slowly peels down her huge size 10 grannie panties and shoves them in the lot Latina’s big mouth. Sahrye’s eyes widen in fear and she resists, but Whitney keeps pushing the panties down until they completely fill Sahrye’s mouth. She seals them in with elastic bandage effectively gagging and muffling her helpless rival. We smack her round Puerto Rican ass to settle her down but Sahrye is furious and she bucks and struggles like a bronco. We laugh and I decide to take a video for the company newspaper so that the dark beauty will be humiliated and fired for breaking the morality clause. I add one more rope splitting her in two and burying the rope deep inside her pussy and ass. We mock and taunt her and leave the damn angry bitch bound, mouth stuffed and struggling on the floor. 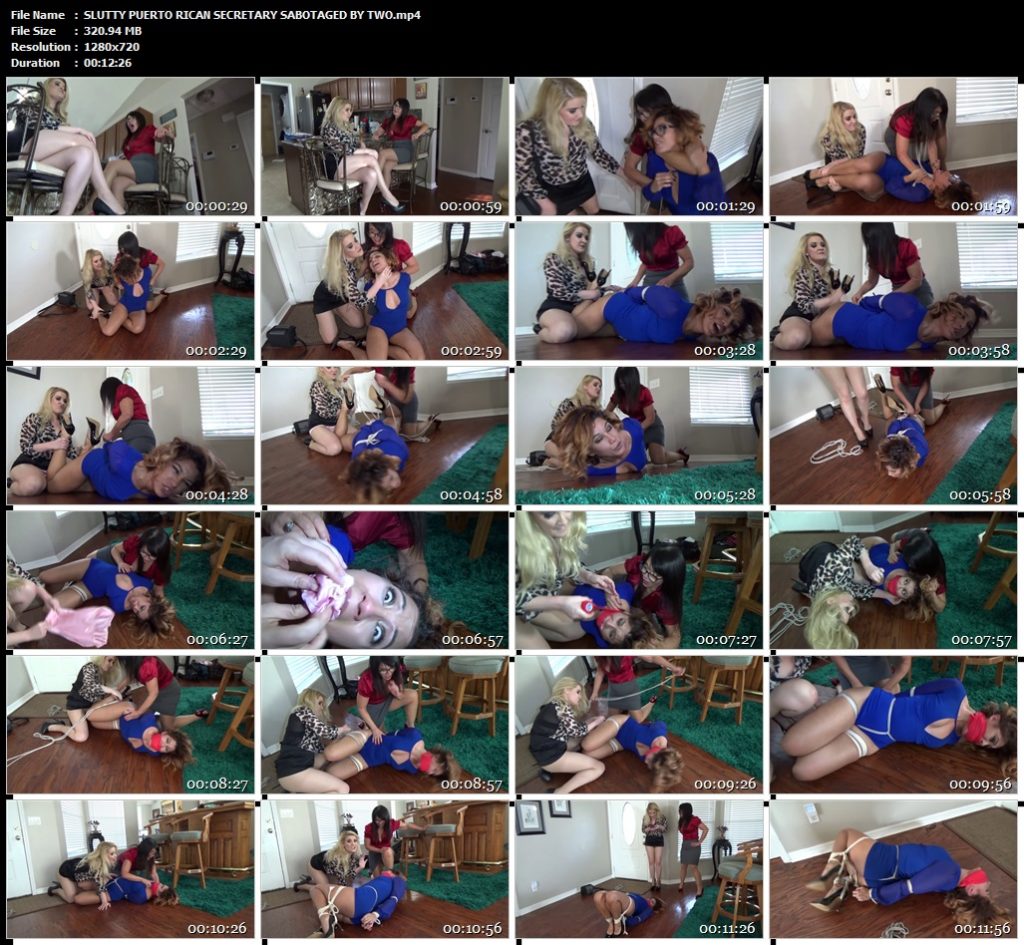