When Dixie is beat out for a modelling job by Sahrye, she assumes that Sahrye has provided the producer with some type of special service to get the job. Having being beat out for jobs by Sahrye under the same circumstances, Dixie decides she has had enough. So when Sahrye goes into a dressing room to prepare for her new job, Dixie is hiding and waiting for her. Dixie jumps Sahrye and over powers her. She quickly ties her hands behind her back and the forces her onto the floor. After Dixie finishes trussing Sahrye up, she stuffs a pair of panties in her mouth to gag her. Then to make sure the panties stay packed in her mouth she wraps tape very tightly around Sahrye’s face and over her mouth. With Sahrye now tightly bound and gagged, Dixie leaves her as she goes off to tell the producer that Sahrye has decided not to take the job. Knowing this, Sahrye tries her best to get loose. But a short time later, Dixie returns to find Sahrye exactly the way she left her. After hogtying Sahye, Dixie torments her for a while. She spanks her and pulls her boobs out of her bra. Then after hogtying her, Dixie gets dressed for her new job and again leaves Sahrye to struggle bound and gagged in the dressing room. 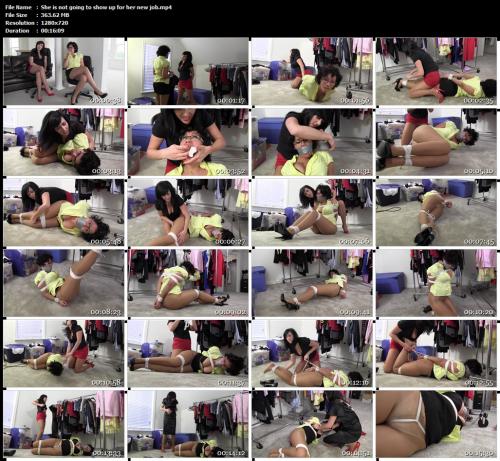 OMG! Someone has me tied up and gagged! – Girl Next Door Bondage – Summer Hart