Arielle is Dixie’s step-mom and Dixie is sure that Arielle has ‘gotten rid’ of her father but she can’t quite prove it. Instead of going to the cops, Dixie decides she’s going to handle it on her own so she has Arielle come by claiming that she has estate stuff to discuss with her. But Arielle can see that Dixie has something on her mind and very quickly things escalate. Dixie overpowers her and gets her step-mom to the ground. She shoves a giant handkerchief in her mouth, rips open her shirt and tapes up her wrists in front. She sees Arielle spitting out the gag so Dixie puts a few strips over her mouth to keep them in. She tape up her chest as she tells her she’s gonna pay for what she did to her father and with that puts a rag over her mouth and knocks her out. Dixie gropes her before dragging her off to the stairs.

Arielle wakes up in the bedroom to find herself taped up. She struggles around a bit and manages to pull off the gag. Dixie comes in the room wearing nothing but a strap-on. Arielle flips, calls her crazy like her father, telling her that she’ll never get away with this. Dixie sits on top of her and forces her step-mom to suck her dick. Dixie gags her with another pair of panties but wraps the tape around this time to make sure Arielle won’t be getting the gag off this time. Dixie then tapes her legs in froggy, gets her step-mom in doggy and fucks her with the strap-on until she cums. Dixie takes off her strap-on then cradles her step-mom pondering what exactly she’s going to do with her. The lake house and the van! She tapes up Arielle’s ankles and leaves her to struggle for a minute. But Dixie quickly comes back when she realizes that things may be a tad easier with Arielle nice and sleepy and hand over mouth gags her with a cloth. 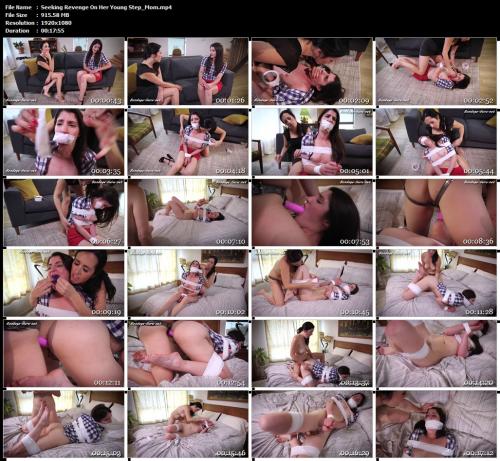