After Dixie makes Delirious cum, she grabs rope and ties up her ankles and mentions the ‘business trip’ her husband is on and how Dixie is to go meet him. Delirious begs for Dixie to take her. After little digging she finds out that they have an open marriage and Delirious has known all along. This is very perplexing and Dixie feels scammed and needs to get to the husband to confront him with this wild turn of events. So she takes off her panties and gags Delirious with them then gets her on the floor and crotch rope hogties her. Delirious is more than willing and seems ultra excited at the thought of being left tied up. Which she is when Dixie finally leaves her alone. She finds a know and starts to pick at it but decides she may as well take advantage of the bondage and crotch rope and rubs one out before spitting out her gag and getting herself free. Dixie really doesn’t know what she’s messing with… 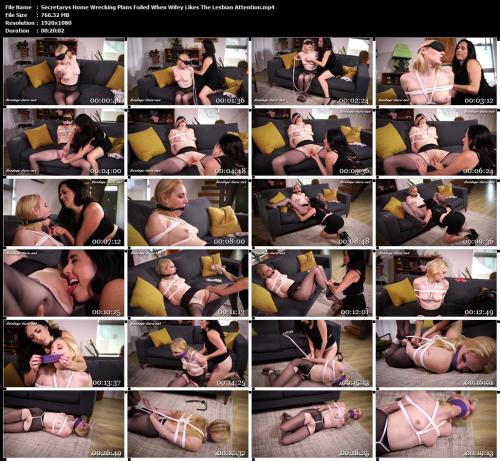