Two liberal political interns (Freshie Juice & Scarlet Storm) got word that a republican intern Adara Jordin is sleeping with the higher uppers to get to where she wants to be. They confront her and tell her they plan to tell all but she decides to get them out of the way for the time being. They have been hogcuffed and ballgagged. She threatens them and talks down to them while her girlfriend chimes in from behind the scenes about how she is all for Adara getting to the top no matter what that takes. After a while Adara takes them one by one into a cage and cuffs them to chairs. They spit their ballgags out but get a more cruel punishment, panties from hookers the conservative lesbian couple have picked up in the past. They are sealed in tightly with clear tape. The liberals are left there while Adara figures out what to do with them next, it certainly involves getting help from those politicians.. Adara and her girlfriend leave and magically one of the girls works a hand out and finds a key on the floor. They take of their gags and decide to get revenge immediately. They turn up at Adara’s house while she is there alone and they are yielding a gun which doesn’t make much sense since they are anti-gun. Adara follows their orders to strip down. Now she is in little girdle panties, pantyhose and bra. They laugh at her because she has several layers of padding in her bra! They tie her up, something they say they’ve been learning at sex positive parties. They gag her with a little spider gag which is later replaced with a pad from her bra and some vetwrap. They give her a crotch rope and hogtie. They put a stocking over her head to humiliate her. They put black tape on it and tape her boob pads to the top of her head. The snap some photos and they leave her there to expose her secrets as promised. Adara works hard to free herself, very hard. She finally achieves it (for real) and gets to her phone and calls her lover (the president) to get some serious help. 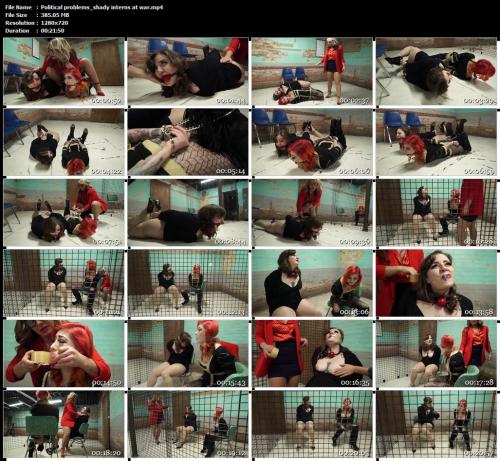 Bondage: JJ Plush, Born to be Bound – The replacement for Simone – Adara Jordin

An entire pillowcase went into that mouth – Bondage: JJ Plush, Born to be Bound

Her hands were jammed into the back of her head!! – Bondage: JJ Plush, Born to be Bound

The maid saw too much – Bondage: JJ Plush, Born to be Bound

Cheating whore caught in the act – Bondage: JJ Plush, Born to be Bound