“Officer” Dixie is at it again and this time she’s scored a hot big titted red head, Paris. Paris questions Dixie’s motives when she is brought into a house, handcuffed and leg ironed, instead of a police station. Paris insists that it’s not like the cop shows on TV but Dixie berates her and tells her that TV is not real life. Paris respects her authority and does as Dixie says. Dixie uncuffs her and tells her to strip out of her clothes so she can strip search her. The only searching Dixie does is some heavy groping of those big tits. She sits Paris in a chair and begins to tie her to it. Paris is finally getting the hint that maybe this is bullshit. She starts to really question the situation as since she is tied pretty tightly to the chair but before she can scream for help, Dixie shoves a pair on panties in her mouth. Dixie finally spills the beans that she’s not a real cop and brings out the hitachi. She vibes Paris, playing with her big tits and licking her nipples, forcing Paris to cum for her. Dixie wants to keep Paris as a play toy-she keeps her tied up but tosses the cuff key on the floor. Paris will need something to keep her occupied while Dixie is away. 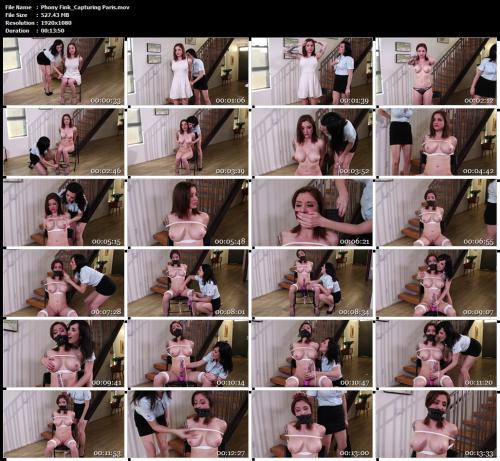