Paris Love is doing some last minute babysitting for Slyyy’s nephew, and the scene begins with Slyyy giving Paris the rundown. She tells him that the nephew is a bit of a weirdo, and is into women’s feet, but in a weird tie-up way. He’s always asking Slyyy if he can tie her up, but she never lets him. She suggests that Paris doesn’t let him either. Paris assures Slyyy that she can handle it & Slyyy heads out for her date. The nephew (POV) walks into the living room & asks Paris to play a game. Paris tells him that she’ll play cops & robbers with him, but only if he makes her a deal. Afterwards, he has to agree to go to bed. The nephew agrees to the deal & the next scene has Paris bound on the couch & her socks & sneakers have been removes. She compliments the nephew on his tying, but after inspecting it she tells him that she doesn’t think his tying is so tough. She bets him $10 that she can get out, then struggles for a bit on the couch. After about 3 minutes she gives & tells him that she’ll give him his $10 after he unties her. He refuses & the camera fades out. The next scene has Paris ties the exact same way except that a rag has been stuffed in her mouth & a duct tape gag has been wrapped around her head. She struggles for a bit begging to be untied, but again the nephew refuses. She gets angry at him & yells at him through her gag & the scene fades out. When the scene fades back in, Paris is tied in a tight hogtie. Her top has been completely removes & her skirt & panties are hanging off of her thigh rope. She’s miserable & humiliated & yells at him some more through her gag. After some time, Slyyy walks into the living room & discovers Paris tied on the floor. Slyyy laughs at Paris’ predicament & eyes up her bare feet. Well, since her date was such a dud, might as well enjoy what’s on her living room floor. Slyyy worships Paris’ feet for a few minutes while Paris struggles & moans through her gag. After some time, Paris goes quiet & Slyyy looks up to see her nephew watching them. The next scene has Slyyy barefoot & tied up next to Paris. Both ladies are fuming mad & furiously struggle to get free. This goes on for a few minutes until the camera fades out again. When the camera fades back in, Paris is struggling solo on the floor & Slyyy walks back into the room. She’s angry that Paris got her into this predicament & instead of untying her, she decides to keep her there for some overtime. 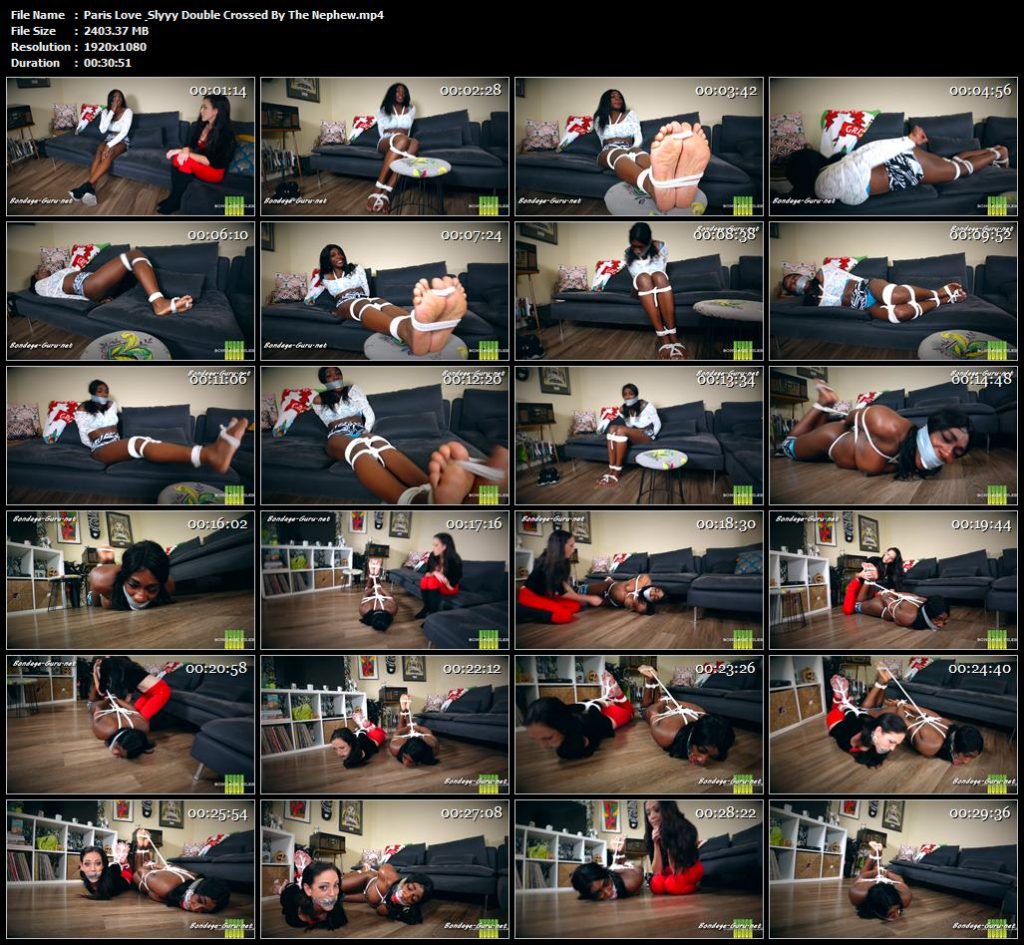 Violet Pixie is brought in, processed, and placed in a cell. – Prison Teens