Nyxon has discovered some inappropriate texts from the babysitter (Nika), on her husband’s phone, so she invites her over to have a little chat. Nika gives Nyxon a bratty attitude & just rolls her eyes, which makes Nyxon even more angry. Suddenly, Nyxon reaches across the couch, clamps her hand on Nika’s mouth, and holds it there until Nika falls back limp on the couch. When Nika wakes up, she finds herself in a tight hogtie, a large ballgag in her mouth, her blouse unbuttoned & her pants pulled down. She struggles on the couch, begging Nyxon to let her go through her gag. Some time passes, and Nika has managed to untie her wrists. She flings the rope onto the floor as Nyxon walks into the room, and of course Nyxon is very unhappy. She tells Nika that if rope can’t hold her, then she has something else that will. To be continued… 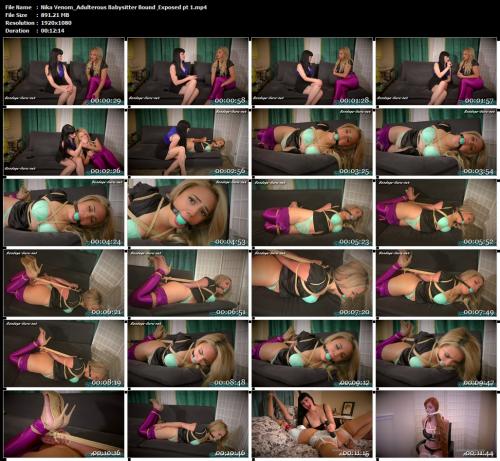