Stunningly sexy in her pink-and-black bra and hot pink leggings, barefoot Missy Minks puts obedient and topless Dolly Leigh into collar, cuffs, and blindfold as she discusses with fans watching on an off-camera webcam site what identity the very pliable Dolly should be today. A doll, a filthy whore, a piggy slut, a fuck hole? They decide that after every time Missy spanks her, Dolly will say, “Fuck me, thank you.” Although that becomes tricky with a ball gag stuffed in her mouth. Yes, there’s definitely a mood of playful humiliation at work here in this new video! Dolly is really under Missy’s power, with her wrist cuffs linked to her collar, as Missy takes down Dolly’s panties and then plays with the helpless girl’s pussy. Amid Dolly’s little whimpers and squeals, Missy puts the Hitachi wand between Dolly’s thighs and we can almost feel the wetness that begins to flow between the Leigh lips! Meanwhile, Missy teases Dolly on how difficult to understand she becomes with a ball gag in her mouth. Wow, how sexy Dolly looks kneeling, blindfolded, gagged, and totally vulnerable as she waits for Missy to do more stuff to her! But the fun is only beginning for this epic forty-minute video as Missy takes off her bra and leggings and, naked now herself, settles into really driving Dolly crazy with that toy.before taking out Dolly’s ball gag so the still-blindfolded girl can suck Missy’s titties.and before getting Dolly on her hands and knees so her sweet ivory tush juts out for Missy’s slaps and that Hitachi! And much more.like Dolly’s first experience with nipple clamps, barefoot tickling and slapping, and being used as a footrest by Missy!! 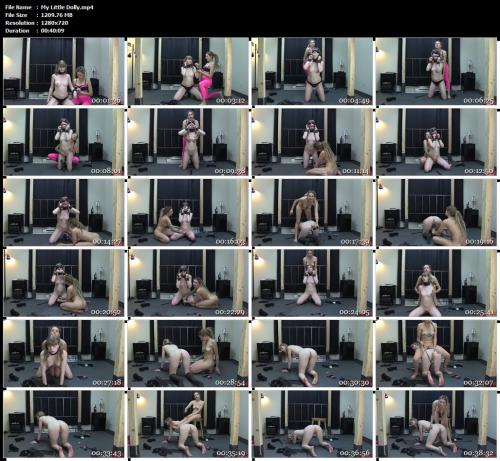