Amanda Foxx is a very arrogant, corrupted and greedy judge. She has been doing favors and helping the cartel mobs to escape justice in spectacular ways. A huge amount of money has been poured into the judge to make this happen and she is becoming more and more greedy. She demands a bigger payout each time they need her help. Recently another one of the mob bosses has been in trouble and the mob appealed to Amanda again. She received a very large cut to do what she does the best, but she refused to get him released from custody demanding more money. When the cartel calls she informs them that she is not moving a finger if they don’t double the money threatening them that she even will send the DA after all of the them as she has plenty of evidence for each one of them so they better ante up the hefty payment and change her mood. Whitney Morgan is the judge’s minion assistant who does all the dirty work for her boss for 30% of the payment after each delivery. They sit talking proudly about their hold on the cartel and and the judge talks about the current case and the demand for more money. Whitney reinforces the idea that she should demand more. The judge’s phone rings and the cartel wants to know why the judge hasn’t release their friend as she already got the payment. Amanda with her arrogance and superiority tells them that she will not move a finger if they don’t double what she asked before. She tells them that their friend will never see the light of the day without more money and even if she doesn’t feel in the mood, she may decide to hunt each of them with the DA as she has plenty of evidence for each one of them. So they better start they making her accounts larger. The mob agrees to pay. Amanda orders them to leave the money at the certain place. She asks her minion to go and pick the money. Whitney is happy as she is in full support of the plan, but the cartel has other plans as their hit woman is sent to make the judge and her minion pay dearly, very dearly. Whitney arrives at destination picks up the money and gets in her car where I am waiting for her. I put a thin leather cord around her neck. Whitney fully obeys and doesn’t move a muscle. I tell her to call the judge to come and pick her up because her car is broken down and she has the money. After she finishes the call Whitney is forced out of car marched into the house stretched in spread eagle while I check the money then turn my attention to Whitney again grabbing the scarf around her neck and gagging her with it. I hit her hard in the belly and then on the head and down she goes. When Whitney awakens she immobilized in a horrible way with ropes crushing her elbows together and brutally bound in a ball tie with a panel gag forcing her to keep the head up. Amanda arrives and sees that Whitney is not inside the car. She enters the house and finds Whitney painfully tied up and as she rushes over I ambush her. She wakes up bound in ropes with her tied tits bursting like lemons. I cleave gag her with thick electrical tape. Once Amanda is secure I release Whitney and force her to watch and I t0rture her boss demanding to know the location of the money and the evidence. I beat her purple tits with a belt then shock her with a tazer but Amanda still refuses to tell me. I grab a bag and fuck with her. Poor Whitney is so terrorized that she doesn’t dare move a muscle. The judge interrogation continues with more brutality and finally Amanda cracks and spills everything. I laugh and tell them their fate. The next thing they know they are both in very tight hogties. Helpless 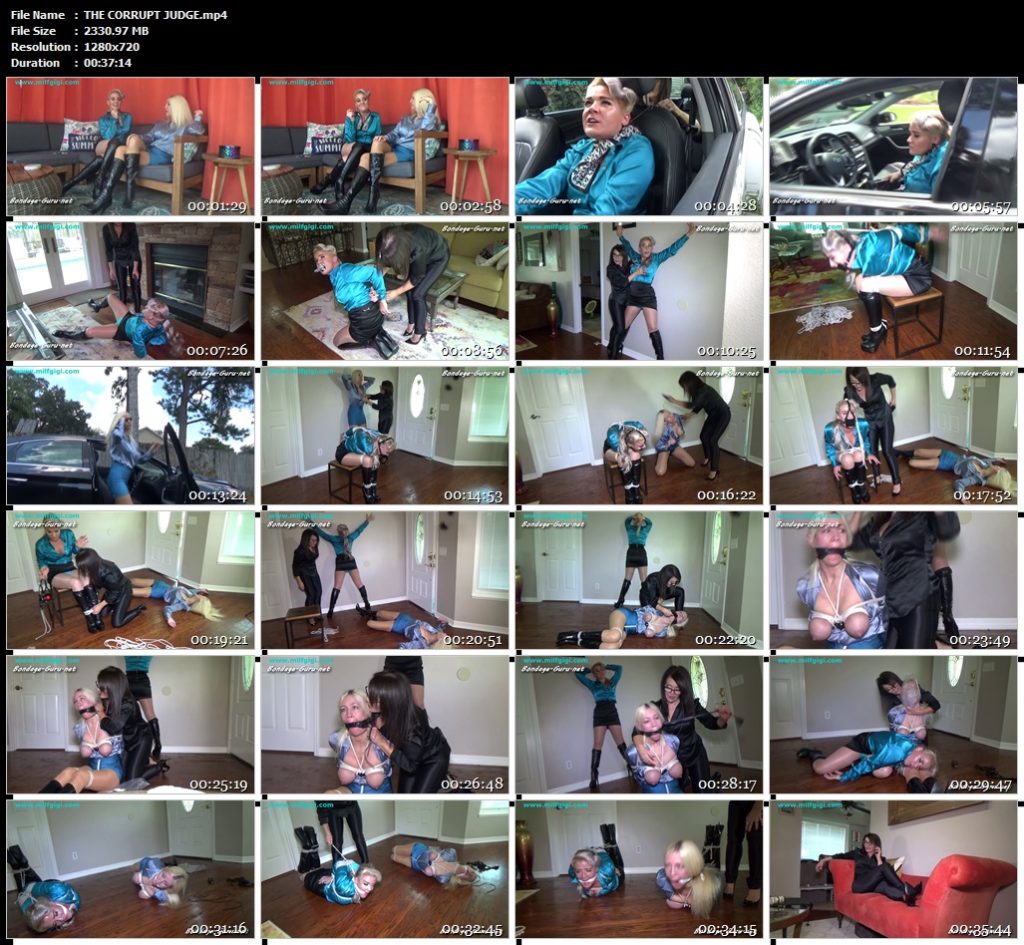