Petite blonde Roxie Rae is a well known boyfriend thief. She preys on men who are taken and loves the feeling she gets when he ditches the other and is now her man. Roxie is so conceited and full of herself and she really has no friends. Her latest victory is Whitney’s boyfriend. Whitney confronts the arrogant brat girl and Roxie laughs in her face – of course he chose me she declares. Little does Roxie know I am on my way over to help Whitney take the blonde bimbo down and knock some of that big ego out of her. I toss Whitney a handful of rope and the two of us start tying her up. Whitney binds her legs and I crush her elbows together behind her back while Roxie rattles on and on about her mouth technique that hooks all the guys. We quickly tire of her big bragging and I gag her with a thick OTM gag. We pull her bound body over the sofa exposing her ass then put her on the floor. We roll her onto her belly and finish the bitch off in a hogtie leaving her helplessly rolling around on the floor … 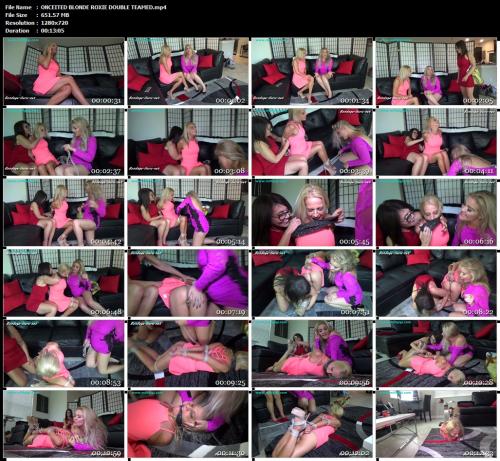