Nyxon has noticed her roommate Lydia & her boyfriend acting very suspicious when they’re around each other, so she decides to get to the bottom of things & reads Lydia’s diary. Horrified to find out Lydia has been secretly sleeping with her boyfriend, Nyxon decides to seek revenge & tells Lydia that she’s going out of town for the weekend. Thinking that she has the entire house to herself, Lydia plans a very sexy weekend with Nyxon’s boyfriend.

The clip opens up with Lydia sitting on the couch wearing a 12 garter black girdle & fishnets, waiting for Nyxon’s boyfriend to show up. She’s so busy admiring herself in her lingerie that she doesn’t notice Nyxon walking into the room (POV). Lydia looks up at Nyxon approaches her, but Nyxon places her hand over Lydia’s mouth, smothering her. Lydia’s eyes roll into the back of her head, and she goes limp on the couch. In the next scene, Lydia is frogtied & struggling furiously on the couch. She makes her way onto the floor, and Nyxon grabs her from behind, shoves a white rag into her mouth, then tapes it shut with duct tape. Lydia screams in protest, but Nyxon reminds her why she’s in such a predicament, and even takes a few photos with her phone to upload to Twitter & Facebook. Nyxon laughs at Lydia & leaves her to struggle on the floor. 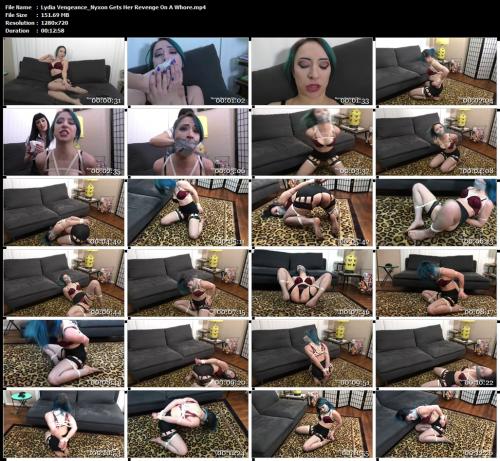