Hannah was the Office Manager who had a sexual crush for Dixie her secretary. But Dixie didn’t feel the same about her and was tired of dodging all of her flirting. In fact Dixie felt she was a victim of sexual harrassment and she had video proof. So when everyone was gone for the evening, Dixie met with Hannah in the employee break room. She showed Hannah the evidence and told her that she was going to report her to corporate headquarters unless she let Dixie play a game with her. Of course, thinking this might be fun, since it was something a Dixie, a woman who turned her on so much was involved, she agreed. Then she found out Dixie was into bondage and before she could change her mind, Dixie grabbed her and started tying her up with rope. Hannah tried to resist, but Dixie was way too strong and soon she had Hannah all trussed up. Then when Dixie got tired of Hannah’s complaints, she stuffed and tied a pair of panties in her mouth to gag the noisey office manager. Now Hannah knew she was in real trouble as Dixie brought out her cell phone and started shooting phots of her all tied up and gagged. Dixie told her that she was going to show these pictures to everyone. This was going to be very embarrassing since Dixie had opened Hannah’s blouse and pulled her tits out of her bra. After a while, Dixie got tired of tormenting her boss and decided to leave her for the evening. But before she left her, Dixie hogtied Hannah and crotch roped her. Now all alone, Hannah started to work on getting loose. However, she was soon going to find out that Dixie had left her one last surprise. Because a short time later, a male co-worker showed up and found Hannah struggling bound and gagged with her boobs out. Apparently Dixie sent him an email from Hannah’s cell phone. The email told him that Hannah had a kinky surprise for him and in the message, it said, “Do Not remove the gag!” 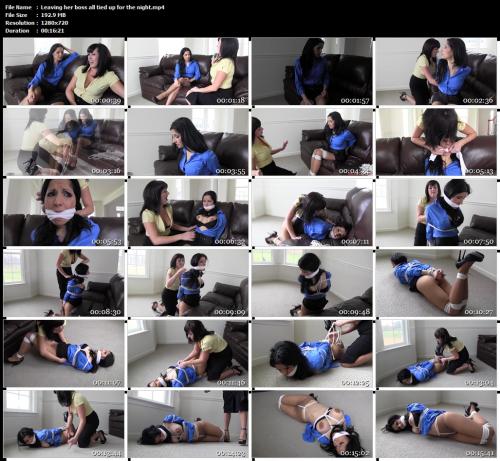 Old School Ties By Steve Villa – My boyfriend’s bitch sister tied me up and gagged me with her panties! – Rin, Dixie Comet