Pretty coed Dixie Comet needed a job and answered the ad for a lab assistant. I call her in for an interview. I explain to Dixie that my grandson Poindexter is a genius and a scientist despite his age. We need a smart girl who excelled at science to be his lab assistant. The job pays very well because of his age and his temperament. I thought that Dixie seemed be a good fit. I get up to leave the room and tell Dixie to stay there and not to disturb my Poindexter who was downstairs working in his lab. Once Poindexter was ready I would introduce her. But once I left Dixie’s curiosity got the best of her. She needed to meet this prodigy and hopefully get his approval so she would have the job in the bag. Dixie creeps down the stairs quietly, thinking that could she just sneak a peek into the lab and see what he was up to. But that is when things went bad … as Dixie grabs to door handle she is suddenly jolted by 50k volts of electricity knocking her on her ass and rendering her dazed and helpless on the floor. By the time Dixie’s body recovers from the shock she finds herself laying on the floor with her elbows pinioned together behind her back bound in ropes. Her slender ankles are also tightly bound. Dixie struggles on the floor trying to sit up, she realizes that Poindexter had tied her up and returned to the lab. Helpless on the floor she tries to crawl up the stairs but with her elbows crushed behind her back it is too painful to push herself up. There was no way she was going to get upstairs on her own so she begins to sob and cry for help. After some time Dixie hears me upstairs andshe calls up for help. I come downstairs. Dixie is embarrassed but grateful thinking that I will free her from the ropes. But instead of helping I look down at helpless Dixie and begin to scold and berate her for being stupid and sneaky. I soon grow tired of Dixie’s whining and complaining so I stuff an old rag into her mouth then pull out a roll of duct tape. I pull the tape between Dixie’s teeth and wrap it tightly around her head sealing the rag deep in her mouth and shutting her up. I then begin to untie Dixie’s bound ankles to get her upstairs. I yank Dixie up to her feet with her elbows still cruelly bound behind her back and march her up the staircase. Back in the living room I push poor Dixie back on the floor and tie her ankles tightly together again. Then grabbing more rope Dixie’s slender wrists are tightly bound as I reveal that Dixie has failed the test to be Poindexter’s lab assistant. But not to worry, Poindexter is always in need of lab rats and pretty naive coed’s make the best lab rats. I hogtie Dixie and tell her that her future is to help my grandson get his Noble prize by being his helplessly bound lab rat. 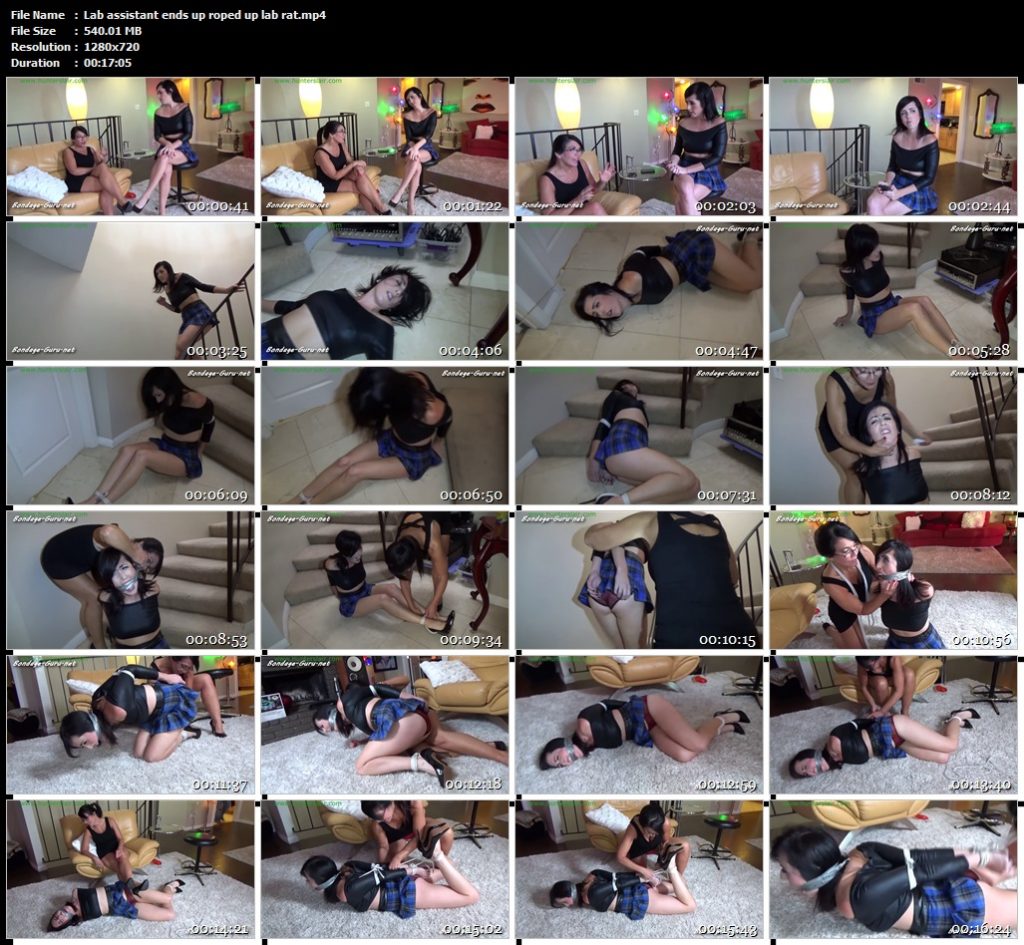