A few days later, Chloe managed to find the villains’ hideout. She sneaks into the house. Once again, she is ambushed from behind and hand gagged. Sophia approaches her and teases her, if she missed her. Before Chloe can answer, she is mouth packed and cleave gagged. They tie her hands, feet and knees. When Chloe is tied up, Sophia sits down on her legs to keep her under control. She cuts off all of Chloe’s clothing, until she is fully naked. While doing this, she asks Chloe, if she actually liked her predicament so much, that she came back for more. Chloe is protesting and trying to wiggle away. She is left for a while Chloe manages to get up and tries to hop away. She is caught again, of course and gets hogtied. Sophia tickles and spanks her and wants to know, how she found them. After some taunting, she finally ungags Chloe. Chloe tells her, that she found out, where they bought the ropes and that the store owner told her, where to find them. Panicking, Sophia immediately stuffs Chloe’s mouth again and cleave gags her, but her partner already heard it and is angry at Sophia for leaving such a trace. They start to argue. In the next scene Sophia has been hogtied next to Chloe. She is angrily shouting at her partner, demanding to release her. Instead, he gags her with a mouth packing and cleave gag. He pulls Sophia’s clothes down despite her protests (showing her breast and crotch). He leaves, telling his former partner, that he will look for another partner. Both girls struggle on their own for a while, before they realize, they have to work together. Chloe manages to pull down Sophia’s cleave gag with her teeth. After spitting out the packing, the girl works on Chloe’s knots with her teeth. Finally, Chloe’s hands are free and she unties and ungags herself. She turns to her former stealer and asks her, what she would do in her place. Sophia talks candidly and wants to be untied, of course. Chloe hand gags her. She tells her, that she did enjoy the predicament in a way; however, she is supposed to steal the bad guys. The video fades with Chloe still hand gagging Sophia and reflecting on her next actions. 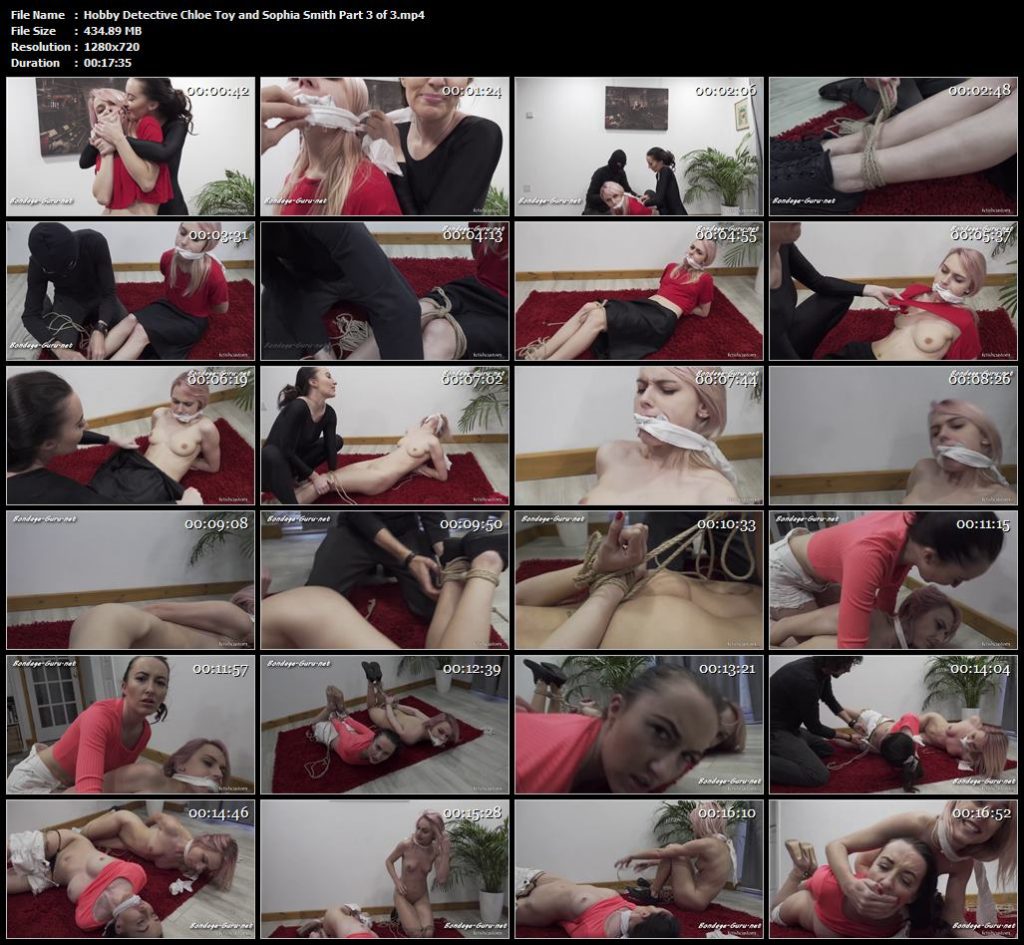 No Such Thing as a Free Puppy! – Bound Honeys Exclusiv

No free drinks for you tease! – Bondage: JJ Plush, Born to be Bound