Private investigators Gia Love and Vanessa Luxx are on a case as undercover strippers. They have been assigned to bring in a criminal that’s been using a strip bar as a front for drugs and storing the drugs in an abandoned warehouse. They’ve been working hard and diligently. Both girls arrive to the warehouse. They sit in the car discussing the case. Vanessa gets a call from the boss. The boss tells Vanessa for both girls to stake the building to see if it’s the perp’s location. They were tipped off by a source and he wants to know if it’s reliable. After some time they hear some noise coming from inside the building. Vanessa calls her boss to confirm the perp’s location. The boss tells her to go in and arrest the bad guy and to check in with him in an hour. Gia volunteers to go in to arrest the perp and tells Vanessa that she’ll call her in 15 minutes. Gia goes in…15 minutes go by. Vanessa pulls out her phone and texts Gia. “What happen?” Nothing. “Are you ok? What’s going on?” Nothing again. “Did you get the guy?” No response. She calls Gia, but again no answer. All of a sudden Vanessa gets a call from Gia. Vanessa answers the phone “hello? What happen?” But all she can hear from Gia is “mmmmmpph” Vanessa jumps out of the car and goes in. Vanessa looks around. She hears muffle cries, after looking all over for Gia she finally finds her. Gia is bound to a chair, her legs are tied apart showing off her red panties and gagged. Vanessa runs to untie her. A voice is heard from behind Vanessa ” hands up! Dont move” Now Vanessa is tied and gagged in a chair next to Gia. I taunt them for being so dumb telling tells both girls that I was the source that called in to tip them off. I leave to attain to some other things leaving the girls alone. As both girls struggle, Gia’s phone starts to ring, it’s the boss. Gia struggles to reach the phone in the waistband of her skirt and somehow answers the phone and cries thru her gag for help. Her boss understands her cries of help but all of a sudden I return. I take pictures of them for a friend that’s into the white slavery business. He’s coming to take them away. I laugh at them and wish them luck walking away leaving both girls to struggle. Both girls struggle hard and they sit helplessly bound wondering what will come first…reinforcements or their demise… 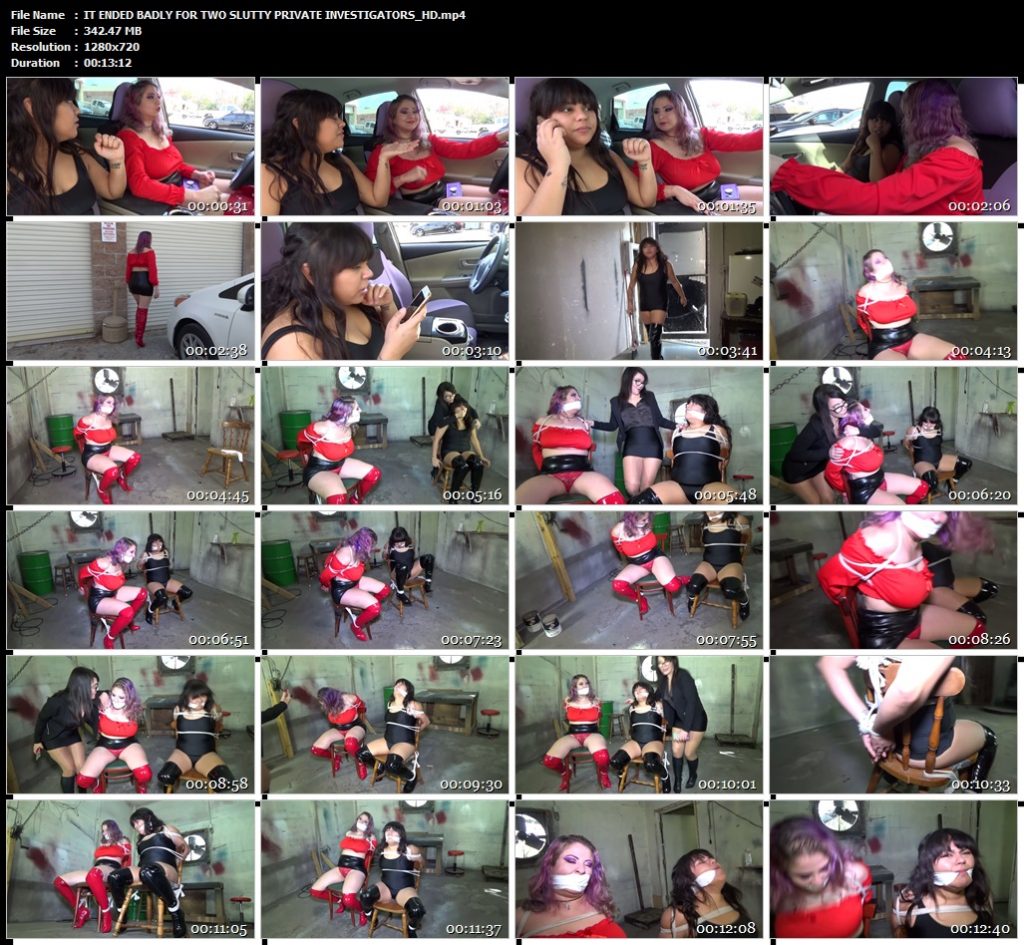