Star met this man at a bar and decided to take him home with her. But once they got there, he got a call that there was an emergency and he had to leave. Not long after he walked out the door, Sahrye walked in and grabbed Star. After a short struggle, Sahrye had her tied up with rope and this is when she started accusing Star of trying to steal her boyfriend. Star tried to explain that she just met the man and didn’t know he had a girl friend. The conversation was abruptly cut short when Sahrye stuffed her mouth with panties and taped her up to gag Star. Sahrye then explained that the man recently broke up with her and that she was the person responsible for the “false” emergency that he had to leave for. Star realized now that Sahrye was a troubled person and she had to get loose to get away from her. But she was tied very tight and could hardly move. Then things got worse when Sahrye hogtied her and pulled Star’s boobs out of her dress. She also lifted her dress all the way up and this turned out to be very embarrassing since Star was not wearing panties under her garter belt. Star struggled bound and gagged for some time and then all of a sudden, she heard the man returned. 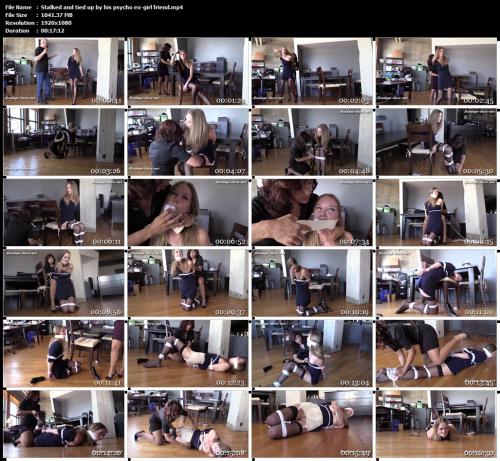 I pretended to be you and they gave me your room key – Bondage: JJ Plush, Born to be Bound

Little lady and her big ego get all wrapped up – Bondage: JJ Plush, Born to be Bound