Having escaped from the sex slavery ring the dirty cops sent her to as reporter Dixie Comet, she returns as the superheroine, Justice, to enact her revenge on the deviant duo. Casey and Lauren are in the kitchen plotting their next . Justice bursts in on them surprising them. Lauren goes at her but Justice knocks her down with a punch. She then grabs Casey and chokes her out.

Casey has been untied and she and Justice are preparing to leave together. Lauren is still tied to the bench but now with ankles crossed and hitachi tied off to her pussy. Justice tells Lauren that she’s alerted the authorities and they’re on their way. She tells Lauren that she should think about her poor choice for a life of crime. But then laughs when she realizes that she’ll have plenty of time to think about it in the slammer. Justice and Casey leave Lauren to struggle in the predicament…having one last orgasm before the cops arrive.

Several years later, the crooked cop, Lauren, has been released from prison and has transformed herself into the super-villain, Rapture. Justice and Casey, now transformed into superheroine Siren, have received a tip about a new criminal in town and are searching an abandoned warehouse. They split up and Justice goes off to search the upper level. Casey stays to search the lower level when suddenly she is grabbed from behind, overpowered and put out by Rapture. Justice hears Siren’s screams and runs back to help her. She finds Siren tied up and tapegagged, struggling on the floor. She bends down to start untying her and Rapture sneaks up behind her with a white rag and puts Justice down for a nap.

Justice and Siren are both tied up back to back, cleave gagged and demasked! Rapture comes in and roughly wakes them both up. The superheroines do not realize who this new super villain is who is threatening to get rid of both of them. That is until she removes her mask to reveal that she is Lauren, the dirty cop. The girls are they are terrified as she vibes them both at the same time with the hitachi until they both orgasm. After they both cum, she blindfolds them and secures the vibrators to both of superheroines pussies and leaves them there to have one more orgasm while they struggle in their binds.
This was a custom video 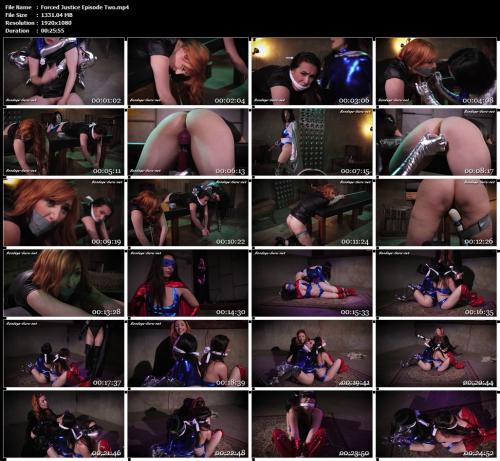