Chrissy is having a dance party in her living room but her music is too loud and someone called the cops on her! The video starts as a steady shot of Chrissy dancing to upbeat music in her fitted white blouse, short black skirt and high heels. After a few minutes the police officer (Khristall) enters dressed in a fitted white blouse and black tie, but Chrissy doesn’t notice her come in and continues to dance. The officer gets annoyed and detains Chrissy against the wall, cuffing her immediately behind the back. She then goes to turn off the music as Chrissy playfully tries to talk her way out of it. Unfortunately for her the officer doesn’t give in and she tightens the cuffs and threatens her to be quiet and behave. Chrissy is stunned that she is actually under arrest. The officer goes on to pat her down and search her then orders her to get down on her knees and stay there while she goes to search her purse. Chrissy is annoyed and struggles but there is no way she can get free from the tight cuffs. She eventually begins to calm down and starts to beg the officer saying things like “Uncuff me please! Please let me go” and “I’ll be a good girl”. The officer decides she has had enough and gags Chrissy with red ball gag and tells her she is taking her to jail! Chrissy struggles and resists once its in and gag talks angrily as the detective pulls her up from your knees and takes her away. 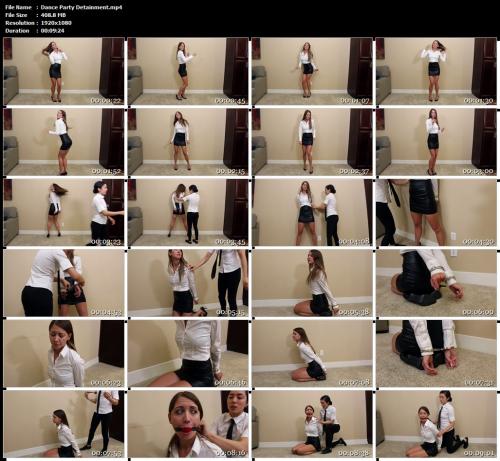