Pretty blonde Kendra Lynn moans as she tries wakes up with the smell of old musty mattress in her nose. Her head throbs and her throat is dry and scratchy. She can hear noises around her and the sound of high heels walking in concrete and a woman’s voice as she wills herself to open her eyes. Kendra’s brain is still in a fog and her body just won’t cooperate. Then suddenly she is jolted awake by my slaps her across the face and shaking her shoulder. Kendra tries to move but her hands are twisted up behind her back and now she can feel the tight ropes cut deep into her wrists pinning her hands up beneath her shoulder blades. Her ankles are also tightly bound in ropes as she looks up in my eyes in fear. She is told that soon she will be making a phone call to her daddy and beg for money. Kendra sobs and cries into her gag and pulls at the tight ropes. I curl up beside her on the cot and start to caress her with my hands in a pervy way. Kendra shakes her head no but I am totally enjoying her distress and helplessness. Then a hulking bald man walks in and the two of us discuss the ransom call. Kendra can’t wait to be unties from the cruel ropes and freed to go home to her own bed. We sit her up and I remove her gag and clamp my hand firmly over Kendra’s mouth. We pinch and twist Kendra’s nipples and she screams in shock and pain into my hand over mouth gag as we explain to her what to say. The man Jim Hunter makes the phone call and then we order Kendra to beg for help. I remove my hand and Kendra can hear her daddy’s voice on the phone. She begs and cries for help before I clamp my hand back over her mouth. After I hang up the phone the man pulls out an old rag and we force it deep into Kendra’s mouth adding duct tape wrapped tightly over her mouth and around her head sealing the gag in tight. The man pulls out more rope and ties it tightly around her belly as I hold her down, the rope is then run down between her legs and pulled up tight between her pussy. The man explains that he is going to leave to make arrangement for the money drop and that the the crotch rope is there to prevent me from violating her pussy and ass while he is gone. Kendra can feel the tight rope split her pussy and press against her clit as he ties it off at her belly. He then leaves telling me to have my fun with our captive but to remember that until we get paid the girl’s pussy is off limits. Once he leaves Kendra is cruelly groped and abused by me. I run my hands all over the girl and dry hump Kendra’s soft bound body. I rub my tits in Kendra’s face as the poor girl sobs and cries into her gag for me to stop. Kendra scream in pain into her gag as I pull out a set of nipple clamps and attach them to Kendra’s exposed tits. Pain shots through her tits as her poor nipples are crushed between the jaws of the evil clamps. I do get off on her pain and I continue to grope and caress poor Kendra. After what seems an eternity of groping and fondling I finally stop and leave poor daddy’s girl Kendra sobbing and crying on the cot still helplessly bound, gagged and clamped not knowing what the creepy perverted couple have in store for her once we get paid. 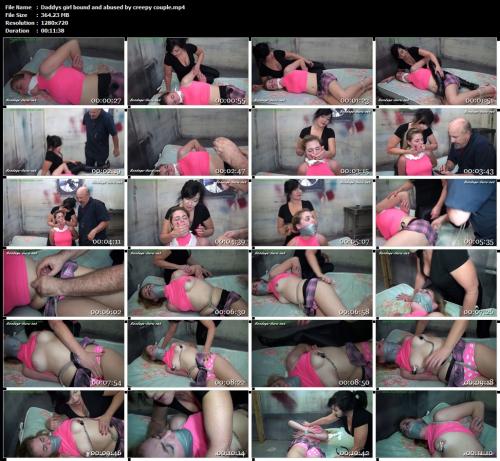