Dacey hasn’t quite been feeling like herself lately, and isn’t sure what’s wrong. So, she seeks the help from therapist Dr. Nyxon. Dr. Nyxon tells her about this amazing new therapy that she’s been doing in her office, and asks Dacey if she’d like to try it. Dacey asks what type of therapy it is, and Nyxon tells her that it’s rope therapy. Dacey is hesitant at first, but Dr. Nyxon eventually talks her into it & goes to get her rope. The next scene opens up with Dace tied extremely tight & fussing about. She tells the doctor that it’s too tight & not quite what she had in mind. Nyxon tells her that tight ropes are just the thing to raise adrenaline levels & get those endorphins flowing. Dacey protest some more, and Nyxon places a spider gag into her mouth & pulls the strap nice & tight. She instructs Dacey to struggle as hard as she can to relieve her stress, and that she’ll be back in about an hour to check on her. 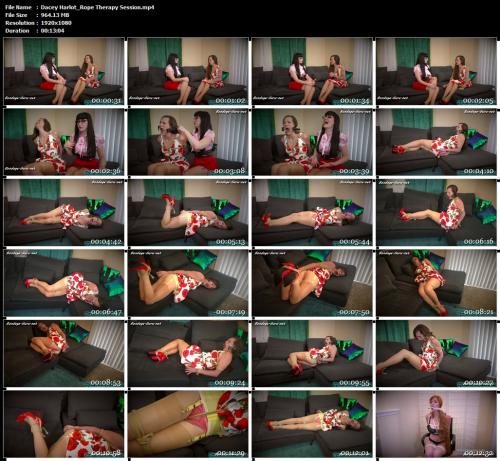