Baby Sid is in quite a bondage predicament, bound and cuffed between two metal poles, in a sheer black bodysuit and stockings as well as a leather corset. Her head and face are in a strappy harness and attached to a rope above, and she also has an inflatable gag in her mouth, under the harness, that can be pumped up with a rubber squeeze ball-which Lydia Black immediately puts to use. Then Lydia smacks Sid’s ass with a slapper. But Lydia thinks there’s too much padding so she takes off Sid’s corset, revealing her titties under the transparent bodysuit. She cuts out a hole over Sid’s pussy. Then she resumes smacking Sid from her titties to all over her legs before bringing in the Hitachi to press against Sid’s bare snatch. The vibrator quickly drives Sid crazy with moans through her gag. Lydia smacks Sid’s butt some more, then inflates the gag some more before leaving her alone to think… 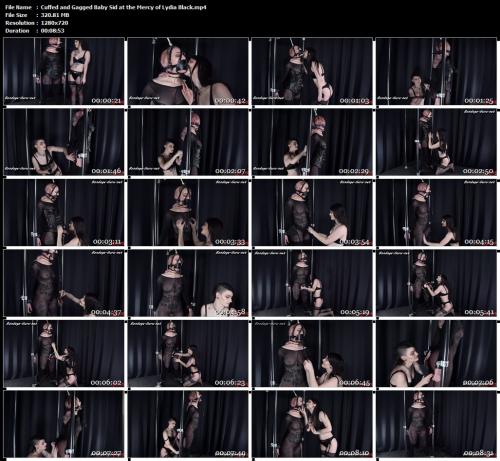