Lilith and Green Eyes finally had some alone time together. For the entire weekend, they planned to spend the time engaged in reconnecting. As they lay on the bed, covering each other in kisses, Lilith knew Green Eyes was getting VERY worked up by her sighs and moans. Lilith asked the young lady if she may want to try something different, and Green Eyes eagerly agreed. Before she knew it, she was tightly mummified in tight black electrical tape, her mouth sealed with a tight tape gag and stuffed with old socks! As she looked around nervously, wondering where Lilith had gone, she tested her bindings and knew there was no way out…unless Lilith freed her, of course! Lilith, however, had other plans! She entered the room and held up a large vibrator and began to run it up and down Green Eyes’ encased figure! The sensations were extremely pleasurable, magnified a hundred fold, and Green Eyes moaned and whimpered in ecstasy through the gag as Lilith teased her with an expert knowledge, the sure hand of one who knew every inch of her lovers body. Unable to fight the growing passion in herself, Green Eyes came, her entire body shuddering, her cries of pleasure sealed behind the gag. Lilith had more surprises in store, however, and left the poor girl all alone in the apartment, still cocooned and gagged and unable to do anything other than twitch and thrash, the tape not budging an inch! Hours went by, and finally Green Eyes heard movement inside the apartment. Unfortunately, it wasn’t Lilith, but rather a burglar who was quite surprised to find such a pretty helpless parcel waiting for him! Eyes wide with fear, the poor girl could do nothing to stop the man from dragging her off the bed! Now left alone in the living room, taped tightly to a chair and still mummified, Green Eyes fought like hell to escape, but the tape was so tight, the bondage so thorough that she could do little more than scream into her gag! Finally, Lilith returned home and was stunned to see her lover bound to the chair. As she attempted to free her, the man snuck up from behind! Green Eyes tried to warn Lilith, but it was too late, and soon both girls found themselves encased completely in the constricting tape! Lilith had been fused to the chair directly on Green Eyes lap, unable to move, her eyes locked onto those of her lover as they flexed and strained to no avail. The man had gagged them with a double ball gag, pulling their bodies close together as they moaned and drooled helplessly over each other. Satisfied that his captives would not escape, the man packed his belongings and left the pair alone, imprisoned in their packaging. It looked like a very long weekend was ahead for the pair! 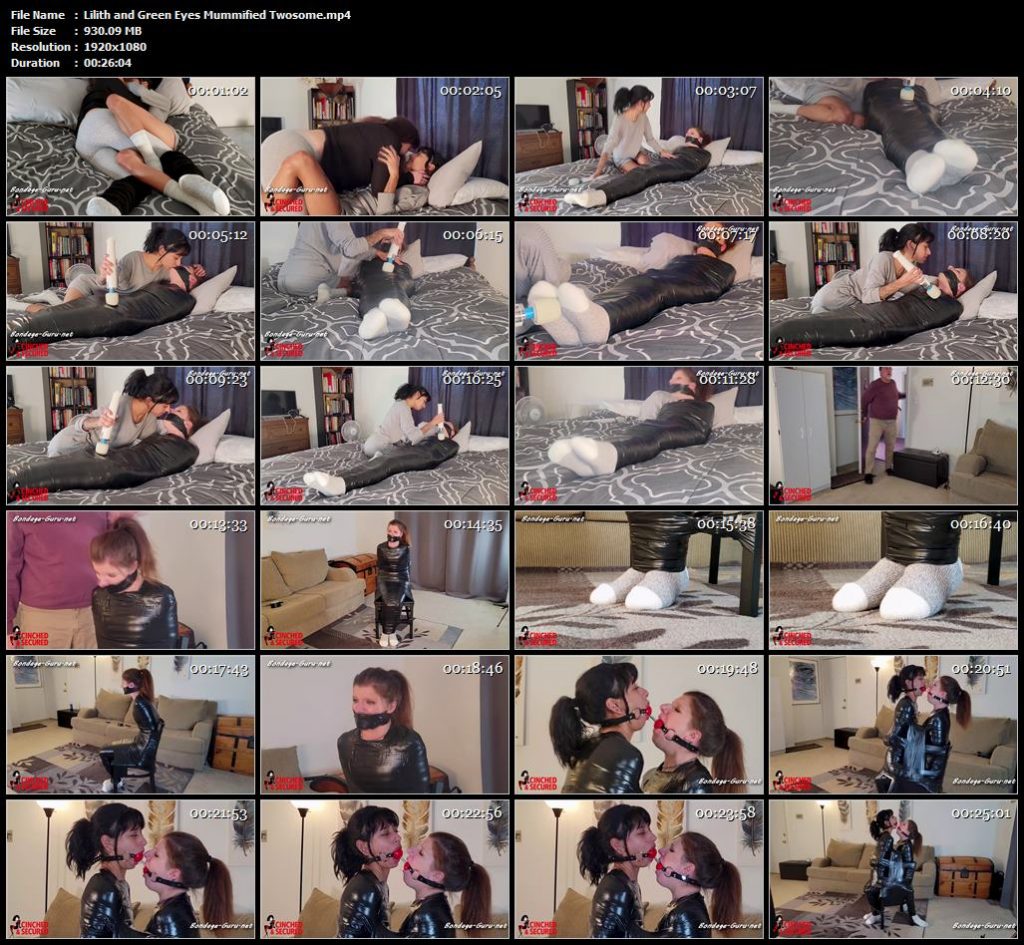 Bondage: JJ Plush, Born to be Bound – Cherry the cheater