Chrissy’s step mom Star caught her sneaking out when Chrissy knows she was grounded! Star has an important event to attend and has to find a way to keep her step daughter Chrissy put while she is out. She decides the best and most secure option would be to shackle her to her bed! Chrissy tries to sweet talk her way out of it by calling her mom, which she never does, and making promises that she knows she won’t keep, but it doesn’t work! Hinged handcuffs are tightly secured around her wrists and ankles and Chrissy asks why she even has these things. Her mom tells her she will understand when she is older and on her second marriage that it’s important to keep things interesting! Leg irons are then used to secure her shackled feet to the bed and another pair of cuffs secure her bound arms overhead so that she is stretched across her bed! Chrissy is getting bratty now telling her step mom that she can’t do this to her and if she leaves her like this she will just scream for help until the neighbors hear her. Too bad Star already has a plan for that! She tape gags Chrissy with two strips of duct tape over her mouth which really makes Chrissy mad and she starts gag bitching at her step mother, but that doesn’t keep her from leaving her there bound and gagged while she leaves to attend her event! Chrissy is left struggling helplessly, barefoot in her crop top and jean shorts. The cuffs and shackles painfully dig into her ankles and wrists as she squirms. Eventually she realizes she is really stuck and has no chance of escape. Hopefully her step mom won’t forget to let her out when she returns! 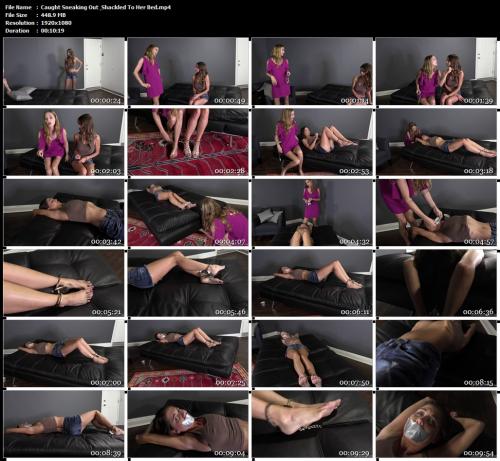