Busty Cassandra Cain is secured by cuffs and short chains to a bondage stool on which she kneels, while Lydia Black slaps her butt and brings the Hitachi into play on her vulnerable crotch. Cassandra’s legs look so sexy in her black fishnet stockings and garters and heels! She moans and sighs as Lydia has her way with her, even sticking her face in Cassandra’s reddened ass and rubbing her pussy. Cassandra doesn’t tug against her restraints at all, as she seems to crave being so helpless as she pants out a bondage orgasm under the vibe. But Lydia is not done with the treatment: she takes off Cassandra’s heels and spanks her fishnet-sheathed soles! Then, after some more bottom-warming too, she puts the vibrator back on Cassandra’s clam until the girl shakes out another climax. It’s only when she’s left alone after orgasm that Cassandra squirms a little, definitely wanting even more to be done to her body! 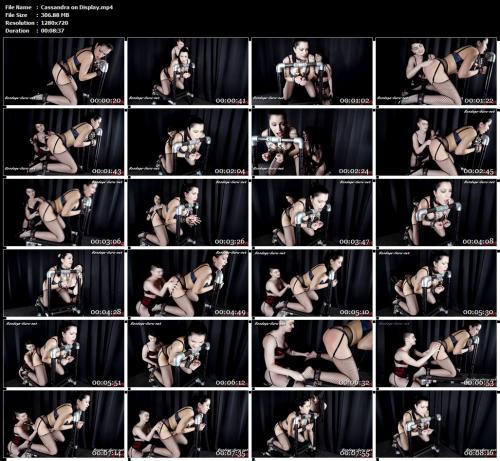