This video is done in flashback style told as busty Asian Nyssa Nevers calls her friend and recants her horrifying night of bondage scene by scene in retrospect. Nyssa is getting frustrated having a hard time getting the boys to go to bed. She wants to be the cool babysitter so she promises to play one more game with them. They talk her into cops and robbers and toss a pile of rope at her. The next thing she knows she’s been tied very tightly and her blouse is open exposing her big tits. She demands to be untied but the little brats ignore her. Poor Nyssa struggles on the rug but the bondage is so tight that the ropes don’t budge. One of them dangles a ballgag in front of her face and quickly Nyssa is ballgagged and in a tight little ball tie her big toes bound to her chest harness. She screams through her gag but she is ignored. Suddenly the grandmother returns home and finds Nyssa helplessly bound on the floor. Nyssa is appalled to hear the grandmother tell her “You shouldn’t teach them these things”. 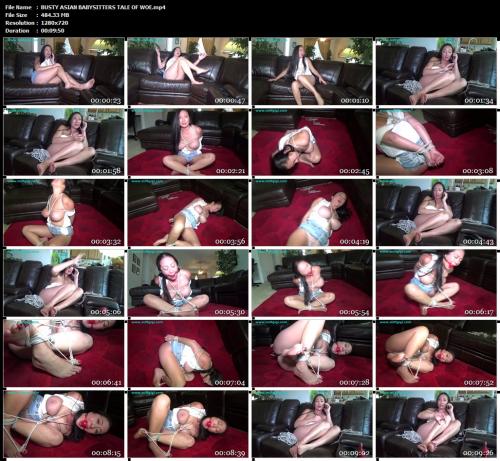