Crockett & Tubbs are cops who have come to Maria’s house to ask her some questions about a bath salts ring that they’re aware of in the neighborhood. They cut right to the chase and tell her they know that she’s the ring leader so she should just make it easy for everyone and come with them down to the station. Maria gets pissed and tells them to leave. The cops agree they have to do things the hard way. Tubbs grabs Maria and Crockett brings out the handcuffs. But instead of putting them on her, she tells Tubbs to take off her shirt. Tubbs isn’t into it and wants to take her down to the station. Crockett threatens him saying she’ll tell everyone at the station about his hair plugs. He agrees and takes off her shirt and bra. Crockett cuffs her then takes down her shorts and panties and pops the leg irons on. Tubbs says she’s made her point and it’s time to get Maria to the station. But Crockett says it’s been awhile since she’s had a tasty treat to feast on. Tubbs like no fucking way. So, Crockett threatens him again. This time with a juicy story of when she caught him jerking off to gay porn in the cruiser. Maria thinks these two cops are playing a joke on her. Tubbs gives in and let’s his partner have her way with Maria. After she makes Maria cum, Crockett finally goes off to search the house for evidence and leaves Tubbs and Maria. She tries to tell him she’s not a drug dealer and that he shouldn’t let his partner treat him like trash. Tubbs is just like, it is what it is.

Crockett doesn’t come back with bath salts but does come back with rope and duct tape. Tubbs gets up and says he wants nothing to do with the situation anymore and leaves to go get some donuts. Crockett shoves a rag in Maria’s mouth and begins tying her up with rope and replacing the handcuffs with rope. Crockett gets Maria on her knees and forces her to eat her out until she cums. Crockett shoves the rag back in Maria’s mouth and wraps tape around her head several time to keep her nice and quiet. Finally, Crockett puts Maria in a tight hogtie and tosses the cuff keys on the ground beside her. Crockett chuckles, knowing there’s no way in hell she’s getting loose and then leaves Maria there furiously struggling on the ground while she goes to actually search the house for evidence. 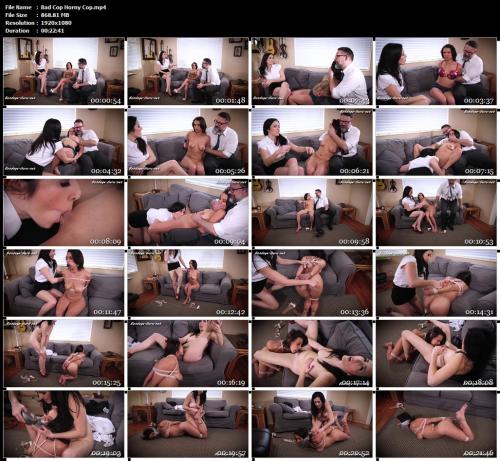