Ashley and Chrissy have been invited to come over to visit their friend Cherry. They find the door open and have been here before so they are comfortable entering. They are unable to find Cherry but they discover a note from her. It reads “I was called in to work. Will be back in a few hours. Please make yourselves comfortable, have some wine.” They pour some wine and begin wandering about. They find a bondage book and a few bondage items laying out. They look at each other and giggle. This triggers some kissing and fondling. Chrissy continues to wander and finds a large box in the living room. She spreads the contents onto the couch. It contains mounds of bondage gear of all types. She picks up a pair of hinged cuffs and examines them carefully. An idea springs to life in her head as she continues to look through the pile. Soon Ashley enters and joins her in looking through the items. They look at each other and seem to have the same simultaneous idea. They both proceed to strip naked and the kissing and fondling continue.

Next each girl finds a good size collar and tightly locks them on each other. Everything locks so they try out the keys to make sure they have a means of escape and then put all the keys in a small box on the floor within easy reach. Then Ashley finds two pairs of clover nipple clamps. Chrissy sucks and licks Ashley’s nipples to make them hard before she applies them. Ashley purrs with excitement. She then sucks on Chrissy’s nipples and clamps them. The girls kiss and fondle some more getting turned on while playing with each other’s clamps. Next Chrissy pulls out a rope and ties a crotch rope around Ashley’s waist. She puts a knot in it to give Ashley’s labia a special treat. It’s very tight and Ashley moans as she walks around. Not to be out done Ashley fashions a crotch rope out of chain and tightly locks it on Chrissy. Then she attaches a leash to Chrissy’s nipple chain and leads her around the room. Chrissy is getting very turned on from the hard metal of the chain piercing her labia. The game is on as its Chrissy’s turn. She finds some bullet vibrators and works one under Ashley’s crotch rope and turns it on. Ashley jumps and then smiles as she too is leashed led around the room. “That looks good” Chrissy says and gets one out of the box and slips it inside her and turns it on. A huge smile is soon generated. Then Chrissy picks up a carabineer and pulls Ashley’s nipple chain to draw her closer. She clips both nipple chains together. “Nipple Clamp Tug of War” she explains with a devilish smile. “First one to cry uncle gets tied up and tortured” Chrissy says with a laugh. So the tug of war begins. Slowly the girls back away from each other. Each can see the strain on each other’s face. Tighter and tighter the chain pulls. Each girl knows all too well the clover clamps tighten as you pull on the chain. Pain begins to be unbearable but these girls are very competitive and neither wants to give in. Finally after what seems like an eternity Ashley cries out “Stop, Stop, Stop!” and moves forward encircling Chrissy in a tight embrace and kissing her hard. “I submit to you Mistress” she says.

Now Ashley stands in the middle of the room as Chrissy plans her domination. Ashley’s clamps have been removed. for now at least. Chrissy starts by tying a tight breast harness encircling Ashley’s breasts. Next she locks her hands behind her in hinged handcuffs and ties her elbows tightly. She then applies shackles to her ankles and locks a ballgag in her mouth. Chrissy proceeds to remove her own clover clamps and reapplies Ashley’s clamps, this time adding a padlock weight. Ashley is helpless and tormented enough by the vibrating crotch rope and nipple clamps but also strangely turned on by this. That was until Chrissy grabs the flogger from Cherry’s stash. At first Chrissy just tries a few smacks with the flogger on Ashley’s ass. Then the strokes get harder and harder as she moves to her front and thighs. Chrissy seems to be getting turned on by the whipping and starts punishing Ashley’s breasts with more and more blows. Ashley groans in agony but the ball gag is blocking her cries. “Stop Stop Stop!” She wants to cry out but all that emerges is ‘Mrrggggmmmmgg”. Finally it does stop. Their eyes meet and the Mistress knows the submissive has reached her limit. Immediately Chrissy drops the whip and begins untying Ashley. The gag is loosened and locked on its last hole still hanging from her neck. The shackles are removed from her ankles. She leaves the vibrating crotch rope in place as well as the breast harness.. but when it comes to the nipple clamps she pauses. She knows very well these hurt the most when they come off. Both girls stare into each other’s eyes. Chrissy sees the pain there as she removes them one at a time. Ashley stands still for all of this but as soon as the handcuffs are removed she pounces on Chrissy and cuffs her wrists behind her back. Their roles have changed and Chrissy knows she is no longer the Mistress. Ashley is and there is a look of vengeance in her eyes.

This time it’s Chrissy who stands still in the middle of the room while Ashley goes to work. They have both removed their heels and are barefoot now. Ashley does not hesitate as she takes the leg shackles and locks them on Chrissy’s ankles. Next she ties a rope around her shoulders and behind her neck. From this she uses it to loop around the center of Chrissy’s cuffed hands and pulls them up as high as they can get. Ashley re-applies the clover clamps on Chrissy and her nipples begin to burn again. She then ties a rope leash to the ring on Chrissy’s collar and runs it down and around the chain connecting her ankles. She pulls out all the slack and forces Chrissy to bend over at a 90 degree angle. The rope is then tied off at the chain between her nipple clamps. There is no way she is going to be able to stand up. Her ass is now at her Mistresses’ mercy. With her head pulled down by the rope to her ankle cuffs she cannot not see Ashley rummaging through the toy box and finding a vibrating butt plug. Ashley starts to unlock the Chrissy’s crotch chain. As it falls away the vibrator which had been under the chain falls to the floor. Chrissy watches it nervously vibrate around on the floor. Then she feels something cool and wet being applied to her. Ashley is busy rubbing lube up and down her backside. Chrissy thinks ‘Oh no she is going to force a butt plug into me!’ She tries to move her hands down to block what she knows is going to happen but now she knows why Ashley has pulled her cuffed hands up so high. Chrissy has never experienced a butt plug before. She has never been this helpless before. Never this fearful and at the same time turned on. Chrissy feels its tip touch and tries to resist but her Mistress knows what she is doing. Ashley slowly works the anal intruder in until it settles home completely inside of her. What Chrissy doesn’t know is that this is no ordinary butt plug. This is vibrating butt plug. Chrissy feels Ashley do something back there and the vibration springs into life. Only then does she realize its hidden secret. WOW she was really not prepared for this. Distracted by the vibrations Chrissy hardly notices when Ashley unties the rope from her collar, stands her up and releases the rope pulling her cuffed wrists up. Ashley then pulls Chrissy’s elbows together and locks them in hinged handcuffs. That pain brings her out of her self-imposed fog. She shoots back “how am I supposed to escape from these?” to which Ashley responds “who said anything about escaping?”

This concerns Chrissy. The ‘game’ had been to do some self bondage and then escape. Both girls were into that and this was not their first rodeo. Once again Chrissy is consumed by the sensations of the nipple clamps and the vibrating plug, so when Ashley pulls her down onto the floor and completes her bondage by hogtying her she is not concerned. However she does notice that Ashley seems to be taking great pleasure into making this a very strict hogtie culminating with the chain from her shackles touching her cuffed elbows. Then out of the corner of her eye she sees Ashley take the box of keys and put them up on a shelf where she cannot reach the keys to free herself. Ashley gets on the floor and starts tying her own legs with rope. Then Ashley ties a rope to the front of each girls collar and then anchors it in front of them. Chrissy is getting concerned and starts to object. At that moment Ashley forces a penis gag deep into Chrissy’s mouth. Her eyes widen when she hears the padlock click locking it on her. Chrissy watches in horror as Ashley gags herself and re-applies her own nipple clamps then completes her self bondage by locking her own wrists in handcuffs behind her back, settling down on the floor next to Chrissy. Chrissy squirms and struggles against her bonds trying to find a way to escape while Ashley remains calm serene. This continues for a while. The struggle vs. the calm serenity. Both girls still turned on in their own way. Then suddenly Chrissy is startled by something. She hears a noise and senses someone entering the room. She looks over to Ashley who still remains calm. If she were not gagged she was sure she could see a smile on her face. Then Chrissy looks up to see a pair of long legs in black leather boots spread wide before her. A riding crop is slaps the side of the leather clad boot. The crop then slides slowly along Chrissy’s face and she cringes at its touch. The crop moves to Ashley’s face but she instead leans into it, savoring its touch. The crop is again slapped against the boot. Ashley smiles but Chrissy jumps and cringes in fear. What has she gotten herself into. and what will happen next? 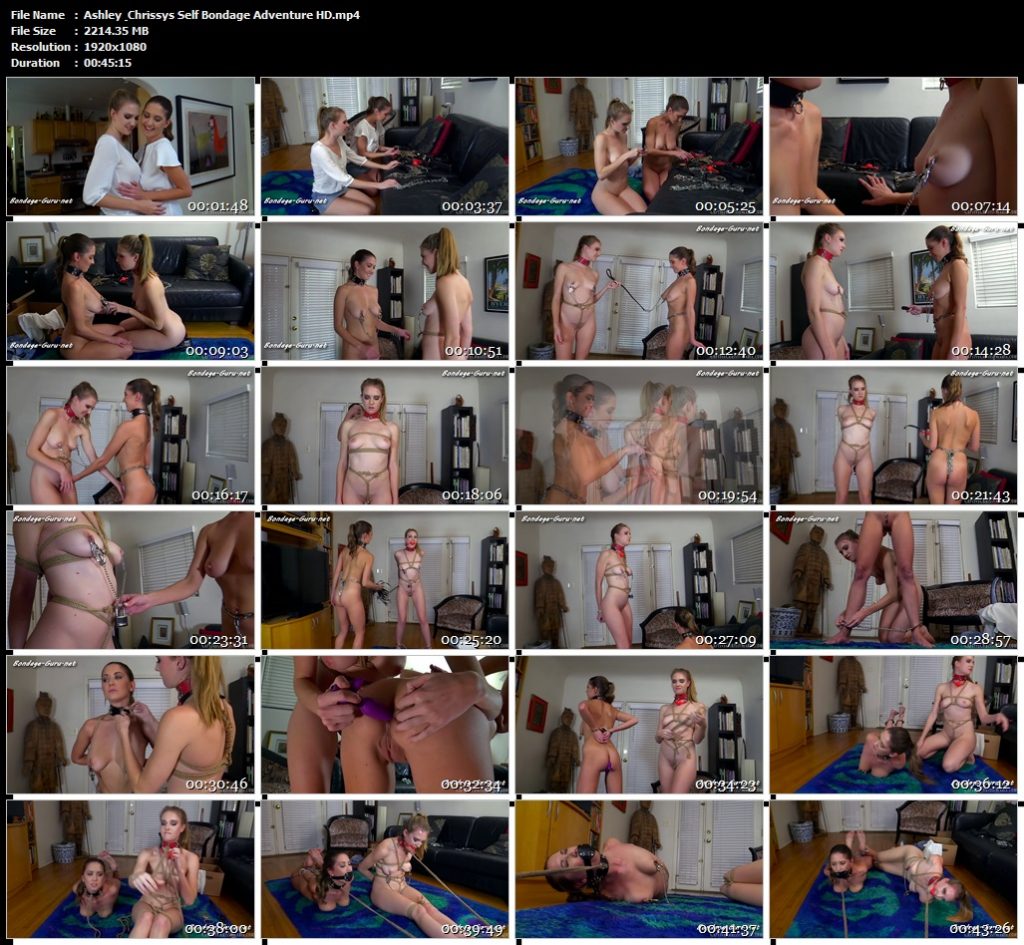