Dressed in a bra & panties, Ally May picks p a pair of nude pantyhose, and puts them on. She rubs her legs & feet for a bit, then Nyxon comes in & asks if she wants to try something. She shows Ally the rope & ballgag, and Ally is hesitant at first, but then gives Nyxon the ok. Nyxon ties Ally’s wrists tightly behind her, then ties her ankles together. Next, she ballgags her pulling the strap tight, then losers her onto the floor where she places Ally into a tight wrist to ankles hogtie. She rubs Ally’s feet for a minute, then gives her nylon covered soles a good tickle. She then leaves Ally to struggle in her binds. 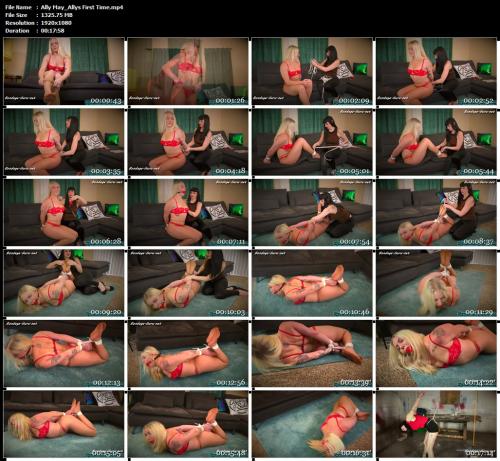 Security guard takes her job too seriously – Dominica, Fayth on Fire – Born to be Bound

Emma & Mikaela in: Damn Burglar Left Us All Tied Up – Now You’re Tickling Me for My PIN?? (Full Session) (HD) – Borderland Bound

No Such Thing as a Free Puppy! – Bound Honeys Exclusiv