FemmBat (Amanda Bryant) managed to get herself free. She knew she only had moments to get ready for the sultry red head Poison Ivy (Kendra James) to return. But the mighty heroine was able to get herself ready. Poison Ivy walked in and although a bit surprised she was not worried. So the over confident villain strutted around running her mouth. But FemmBat was in no mood for banter. She grabbed Poison Ivy took her down onto the couch. It took the young sexy super heroine only moments to render Poison Ivy a non threat! Once Poison Ivy was out, FemmBat decided it was going to be time to return the humiliating favors that had been bestowed upon her previously. So she removed Poison Ivy’s boots and then her costume. The she tied Poison Ivy’s hands behind her back. Now the pay back would begin. FemmBat removed her boots and began to rub her sexy pantyhose covered feet all over Poison Ivy’s face making the angered super villain worship them! After doing this for awhile it was time for the next level of Poison Ivy’s humiliation. FemmBat secured Poison Ivy to some weird contraption with wheels she found in the crazy villains bedroom! She also gagged Poison Ivy as well. Now it was hitachi time but this time it would be Poison Ivy screaming in orgasmic bliss whether she wanted to or not! Scream and moan she did! After a couple orgasms FemmBat added a blindfold she had found and then continued with the hitachi. After a few more orgasms, Femmbat decided it was time to go. Exhausted Poison Ivy was moaning softly as FemmBat pushed her out for the police to pick up. 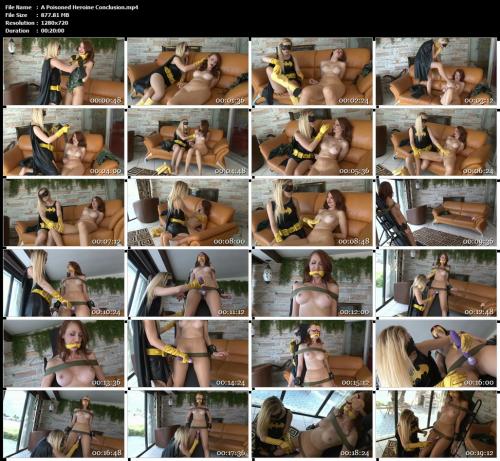