Inmate Leilani is siting in a car on her way to a half way house. At least so she is told. She is wearing jail jumpsuit, waist chain handcuffs and shackles and a pair of flats or sneakers. The waist chain is tight around her waist. She is also wearing pantyhose under the jumpsuit. No underwear. The shackles is put outside her pant leg as in the picture attached. She is talking to the guard driving her. She is so happy. She has been in a prison cell for to many years now. She was a business woman but unfortunately she embezzled a lot of money and ended up with a long prison sentence. It is so nice to se the sun again. For the first time in her time in jail she has been allowed to wear pantyhose under her jumpsuit. The guard gave her the pantyhose to wear because she told him that she always wear pantyhose when she was a free woman and he wanted to be a bit nice to her. She feels at least a bit more like a lady. She has also fixed her hair to look as good as possible. She is wearing some nice business style glasses. She wants to give a good impression. She smiles and is so glad she is going to the half way house. Make some footage of her in the car. She is sitting with seat belt on. You don`t have to drive but make some footage of her sitting in the car with seat belt on talking to the guard. Leilani and the guard improvise some dialog in the car about her excitement about the half way house. She has heard that she is going to a family and that she is going to work on a farm. She is very used to the restraints and she is not struggling in the them.

The car stops at the half way house. She is escorted out of the car and starts to walk in her restraints. You walk over to her, handshake and welcomes her. She told that she have to be in her restraints for the first couple of days until she is safe to be let out of the restraints. She is very understanding and fully understand. She is also told that she have to follow all orders, if not she is sent right back to prison. If she behave she will get respect back. She will of course do what she is told to do and follow all orders. She is not a violent inmate. She is used to wear restraints from her many years behind bars. She is escorted around on the farm to be a little known at the place. You tell her all inmates have to walk fast in their restrains. Inmates don`t have to run, but the shackles is no excuse to walk slowly you say. Make full figure footage of her walking in her shackles. When you walk normal LeiIani tries to walk same speed. I love shackle walks. The two of you talk and you tell her a little about the place when she walks around. After a long walk she enters the building / studio. She is told to sit down on a chair in the middle of the room to be questioned.

She is interviewed and asked a bunch of questions. Ask her about things like age, what crime she is in for, If she has been in prison many times, what she thinks about restraints and stuff. Suddenly she see that there is a lot of nylons, rope, black electric tape, chains laying in the room. She asks gently why you have all that. You tell her she will know soon enough. She tells you that she loves nylons and that she finally was allowed to wear some. She kicks of her shoes. To show her nylon covered shackled feet. She is so glad she is finally allowed to wear nylons again. She is told that it is good she likes nylons because this place is all about nylons. She smiles and is so happy.Thats her favorite too.You quickly encase her head. She is a bit surprised but smiles and continue answering questions. She is asked about what she think about having her head encased. Love closeups of her encased face. She is asked what she thinks about the restraints she have to wear. She is so used to it and kind of like restraints in her private life. Of course it is not that fun in prison but it is ok. Thats good your say. Because this plaice is also all about restraints. She is told that she can be released a lot quicker if she signs a contract of been a pantyhose encasement slave at the farm for a month. She is even more surprised. What kind of half way house is this. Here you are siting in a chair fully restrained with your head covered in pantyhose asked ti sig a contract of been a slave for a month. You tell her it is up to her, but one month af slavery or two years working for free picking stones in a field at the farm.. Ehhh..She is really excited. Only one month. She say yes and is ready to be a nylon slave and sign the contract.

First she have to show that she is fit and is told to run in her restraints. She put on her sneakers again. She have to warm up for her next challenge. She is told to walk outside again. She must run outside like a humiliated nylon headed inmate in her restrains. Make some stupid games for her. Make her run to pick up a stone or stick and run back again delivering it to you. It is hard to run in shackles and it is hard pick up stones or sticks when your hands are cuffed to the waist chain. Every time she comes back she have to stand straight and say “I am a nylon head, I am a nylon head”. When she has done that for some time she is asked to go back inside for a new challenge.

She runs into the studio to be fully encased top to toe. She is un chained and asked to take of her uniform. She wears just pantyhose and a bra when you start encasing her. Talk a lot. I like that and have a fun approach to it. Encase her upper body and then her head before you tape her. No gag before she is taped up. When her hands and feet are taped tickle her a bit to find out if she is ticklish. tickle her face and neck. Make some close ups of her laughing encased face tickled. Try to find her most tickling spot so you know where to attack before she is totally helpless in her hogtie. After some tickling it is time to make her suffer a bit in a super hard hogtie. When she is hogtied you try to pull her head back with the pantyhose without a cleave gag. Se if it works or if the pantyhose slips of her head. When you have tried this for a while it is time for the super tight electric tape cleave gag over her pantyhose covered face and pull it back attaching the end of the pantyhose to her feet or toes. Make sure it is as hard as she can take. Her face is really distorted. Tickle her feet. Tickle – tickle – tickle until she can`t take it any more. The two of you talk a lot and she tries to talk to you even with her cleave gag on. Lots of close ups of her encased face trough the whole encasement shoot. 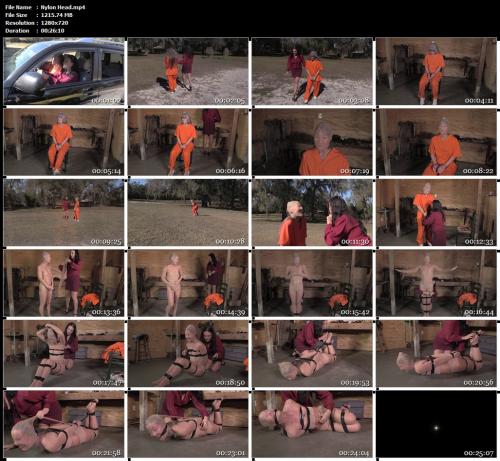 She Broke Out The Big Boy

This Is A Lot Of Money Maybe I Will get My Hair Done – Dakkota Grey, Brenda Bound – Brendas Bound Bondage Addictions