Chrissy is taking a class on how to survive being attacked. Her instructor tells her first lesson revolves around being taken from behind her, so he tells her he is coming to sneak up on her and hand gag her for one minute unless she can break away sooner. He holds her tight and keeps her quiet as she tries to break free but she is unsuccessful and all she can do is struggle and mmpph. After a minute he releases her and tells her they will work on some escape techniques later. He then tells her he is going to tie her up, but he forgot his ropes and asks her if she has scarves he can use. She brings them to him and the scene skips to her already tied to a chair her hands tied behind her back and her feet and legs tied up with the scarves. He tells her to make it realistic he is going to have to gag her. He goes into her room to find a gag. He returns with one of her stretchy bras and cleave gags her with it and tells her to try and escape. She mmphs and struggles, and he says to push out the cleave gag with her tongue, but she muffles just that it’s too tight. He shakes his head and says they have a lot of work to do.

Later that night Chrissy is in her bedroom and thinking about her lesson. She decides she wants to practice, she definitely needs it! She puts her hands behind her back to pretend there is a robber, but then remembers she was gagged. She takes off her socks and cleave gags herself with one. She puts her hands behind her back again and pretends to be tied up. She struggles and mmphs, but then begins to feel naughty and pretends the bad guy is forcing her to strip. She struggle some more in the nude, then decides to take a shower.

While Chrissy is in the shower, she hears a loud noise, but doesn’t think much of it at first. She turns off the water and covers herself with a towel. When she opens the door she sees a masked man in her house. She screams and drops her towel and runs for the door. The robber catches her and hand gags her to keep her quiet. He tells her to be quiet and do as he says and if she does he will not hurt her. He takes his hand off her mouth but she begins calling for help again so he hand gags her again. The scene skips to her tied up. The robber has shoved socks in her mouth for the time but is looking for a better gag. He finds a scarf and he pulls out the sock as she begs to be let go. While she is still talking he cleave gags her with the scarf. He then fondles her body a little before continuing his robbery, all the while she squirms and mmphs in helplessness! 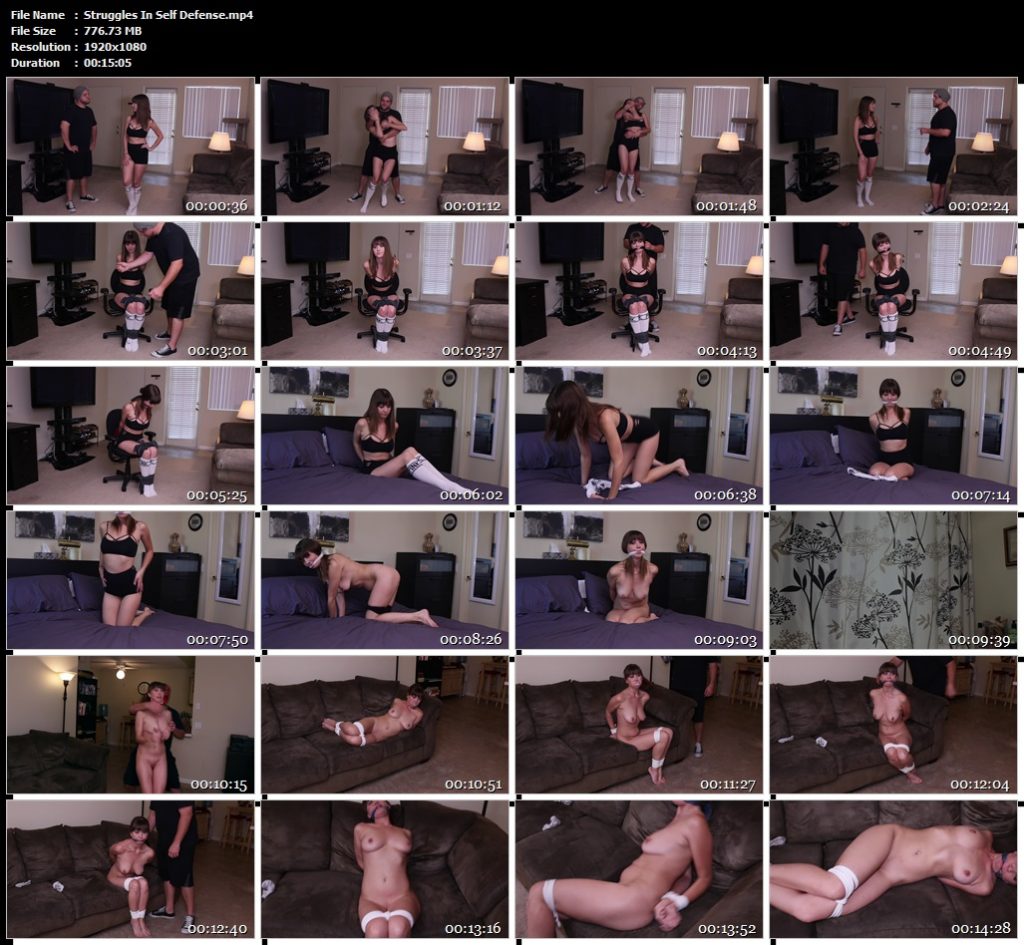 Broken Down & In A Bind – Captive Chrissy Marie