Lathering up her breathtakingly gorgeous bod in the hot steamy shower (you like??) Sophie is a lady alone. But one with a terrible burden Shes witnessed a bit of a major misdeed type deal you see, and is trying to relax while gathering her thoughts on what to do about that unpleasant fact. While shes mulling it over, the perp himself has, unfortunately for her, let himself in through a downstairs window in preparation for something he has already mulled over for HER. Hearing him over the water (hes a real bad guy but even real bad guys can get clumsy) she emerges from the hot and sexy steam and quickly dries herself off. Wrapping a towel around her deliciously nude form, she heads off downstairs to see what made that noise! Pausing to put on her new Baby G watch (very important she knows what time it is) she has no idea that the creep is doing what creeps do creeping up. Boom! He nails her with a stunner of a wet rag and down she goes, unfortunately losing her towel in the process. She later comes around, lashed firmly to a bannister as the bad dude feels her up a bit while telling her she knows way too much and as a result cannot possibly be allowed to go the authorities. His plan? Blow her ass up with a cheeky bundle of TNT. Standard, eh? Sophie is at first bemused, and then angered, unleashing a torrent of foul-mouthed abuse at the evil gimp-masked, welders-apron-clad sod! He chuckles it off and struts away for the moment, presumably to ready himself before Sophies final big bang. While hes gone, the buxom nude notices hes dropped something shiny and silver and tries with all her might to reach it with her pretty painted toes in the vain hope of cutting herself free of her tight bonds. No such luck and now hes coming back with a mega tight cleave gag for her, so much noise is she making. The now firmly muzzled Sophie is humiliated with another round of boob fondling and spanking (oh yeah, baby)and then further subjected to a tight ankle tie and left to continue her very hot struggle on the staircase – with only a bundle of blow up gear for company. Our incredibly sexy captive twists and turns, gag-talking and yelping with typical exuberance. And to cap it all off, the clown turns the lights off on her before he leaves! I guess he thinks the place is gonna be lit up more than enough after hes fled the scene. What a (well, wed better not say THAT). This little number was yet another very fun CUSTOM VIDEO to do. Would YOU like one? 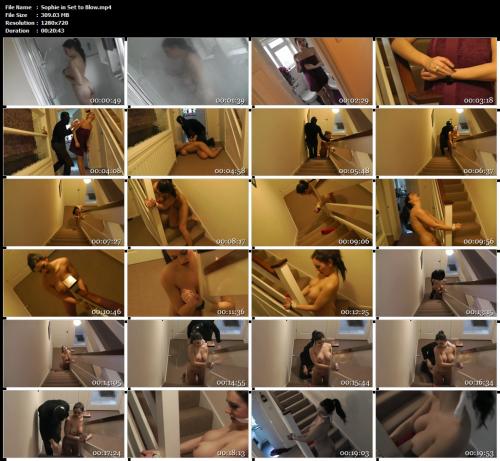