Sadie and Nyxon are roommates and want to go out for the night. They come out of their rooms and notice they are wearing the same outfit. The girls both insist that the other should go put something else on. Finally when their male roommate can’t take anymore, he comes up with a brilliant idea. The girls will have a good old fashioned tug o war, and the loser has to change her clothes. The girls agree and the roommate grabs some rope. The girls are confused as he ties them opposite each other on the bed, but he assures them he’s securing them to make sure its a fair contest. Once their arms are bound and they are helplessly tied to the bed, he ballgags them. Now amid a shower of muffled protests, he ties on some tight crotch ropes on the girls and connects them through an anchor in the ceiling. The girls now understand what was meant by “tug o war”.. If one girl moves in the slightest, it pulls the other girls rope tighter up into her pussy. The girls attention turns to each other. First Nyxon gives her rope a little test tug.. Sadie responds with a yelp, but soon returns the favor. Pretty soon, the girls are going at it trying to pull each other in uncomfortable directions. The guy roommate can’t pick a winner, so he decides to up the stakes. He takes a super heavy dumbbell off of his weight set and adds it to the crotch rope between them. Now the girls are in big trouble. Any inch given now is taken by the weight sliding down, and pretty soon the poor girls are pulled together at the crotch! “I can’t decide a winner girls..” He says “So.. I’m just going to leave you like this and neither of you are going out tonite!” 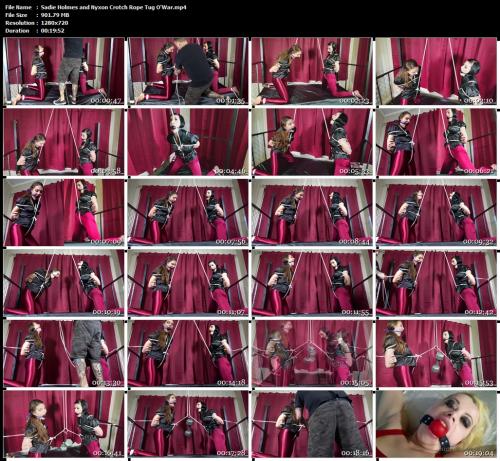