It was a scene of pure mayhem. Two busty, stripped secret agent beauties writhing bound like pigs in a room at the back of a creepy house, their mouths stuffed first with their own panties and then with thick dirty sock rolls, their faces smeared with very sticky pink tape. Gagging and raging to be let out, Agent Robin CrackPot finally breaks in and removes their gags, for a story of expert overpowering and stringent captivity at the hands of their vanished captor. The crook had intended to ‘nap them, with plans to spirit their naked asses up to the deserted lighthouse at Johnson’s Tip. Thank GOODNESS they are rescued! But before that, they were in a world of exquisite jeopardy. Want access to it? Then let’s begin.

On the trail of notorious rum smuggler Arthur ‘ThreeStrikesandYoureOut’ Millwall, buxom saucepots Kellie and RaRa have been called in to achieve where law enforcement have failed. Unfortunately, the ladies will be failing also, and in far more spectacular fashion than those who have gone before them! MillWall and Co. are believed to have been using the Old LightHouse up at the Tip to hoard the booty, and all was going so well, until these two interfering bitches started poking their noses in. There’s only one thing for it: They must be contained!

Sneaking up on the snooping RaRa, in her gorgeous gold dress and heels, MillWall handgags and wrestles with her. She almost has him, she’s that strong, and so he decides to teach her a lesson in going down without a fight. When Kellie arrives she finds the squirming captive unable to alert her to danger and she too is taken down. The babes are stripped completely naked and gagged with their own panties as due humiliation for giving this guy a hard time corralling them. With Kellie trussed up, her wrists bent and crazy angles, as with RaRa’s and lashed in the small of her back, they are both thickly cleave gagged extremely tightly. No way are they spitting those panties out.

Dragging the fuming tough bitch RaRa across the floor, MillWall avails himself of her big tits – and O’Brian’s for that matter – and then leaves the humiliated babes writhing helplessly in their restraints. As they bounce on their boobs and glare about the room, they are wondering if back up will arrive. They told one of their colleagues, Robin CrackPot, where they were headed. They just hope he clues into the fact that they’ll have been missing for a while!

As the babes fight their ropes, no way are they loosening even a bit – both are summarily hogbound, extra hard. The gang want them silent and utterly immobile while they crate up the last of the rum they have here and load it onto trucks in the yard. They’ll drive that booze out tonight, along with these two, and get rid of them somehow. Nobody knows exactly how yet, and it’s enough that they have them captured and unable to warn anybody of what they’ve seen.

Tying their twitching bare toes together as they rant and rave with the volume right down (those stuff-knicker gags are EPIC – the girls are powerless to prevent him taking yet more of their dignity by trussing their damned feet together. Then they are alone again, gag venting and struggling hard.

When MillWall shows up like a loathsome penny once more, he takes great pleasure in sticking very sticky pink tape over RaRa’s massive tits as he prepares to get them gagged with the stuff. The consensus is that these two be rendered completely incapable and that includes their smart mouths. By now jamming their pie guzzlers with two pairs of old and none too clean socks, and slapping many strips of that pink shiz over their faces, their unwilling silence is assured. Then it’s more tit-grabbing and spanking for the naughty, pigbound snoops! Oh they don’t like that, and oh WE do.

With the girls tightly bound and gagged, preparations are made for later that night. They’ll grill them both at the LightHouse no doubt – find out just what they have on the gang – before getting rid. But, what’s this?? The sounds of cars screeching up outside?? MillWall vaults a fence and is off. He doesn’t feel brave enough to tackle more agents. All girl ‘napping is indefinitely on hold!

With the girls mmmmppphhhhing excitedly from the back room here, they are enormously relived that rather than their demonic captor returning for a feel up of their naked bodies, it’s their man. They KNEW he wouldn’t let them down. Animatedly gesturing for him to remove their gags, they start spilling the beans, after unloading those wet socks from their maws. It’s quiet a tale, and an embarrassing one. But, as they jig around with their toes still trussed and their dear bods all pig roped, they sure are glad they are being found like this than taking that ride out to Johnson’s Tip with the MillWall Gang. Now, get us OUT of these ropes!! Oh man, this is sooooo hot.. But you know that already from the pics don’t you! Yep. We wouldn’t advise missing this! 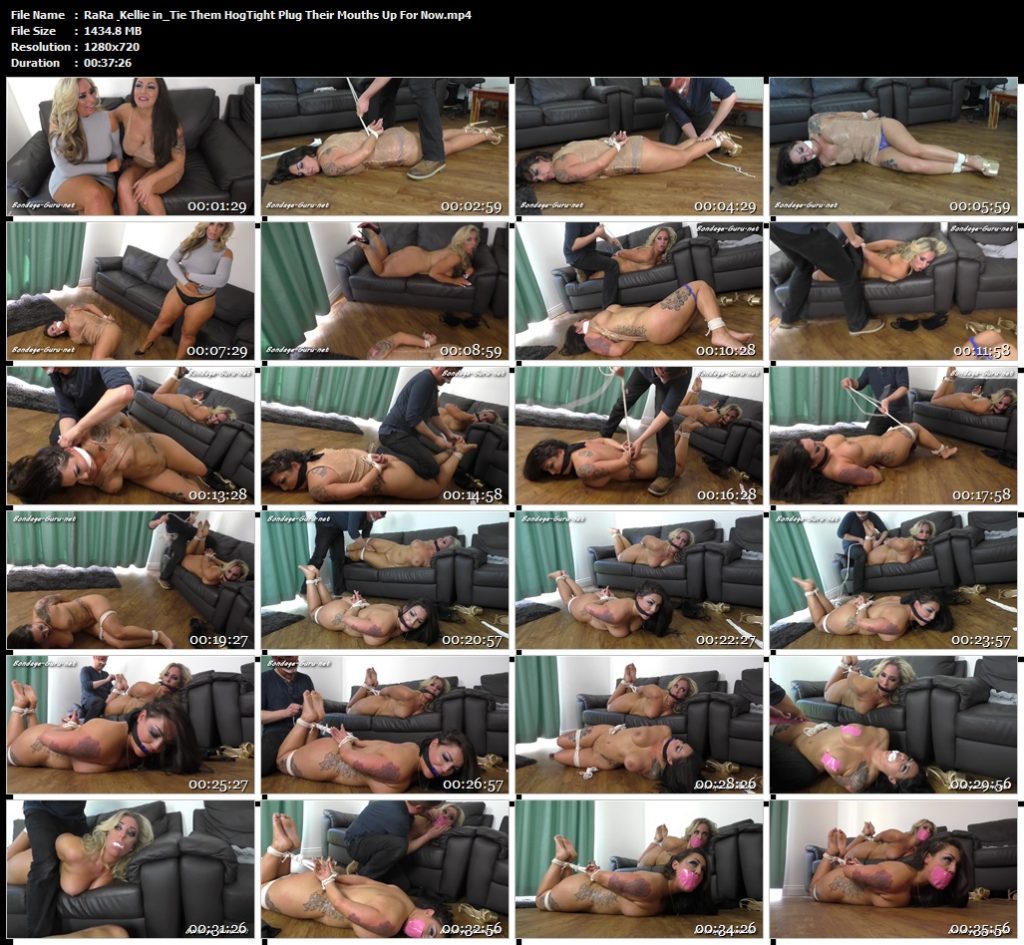