Kyra gets all dressed up and heads over to her boyfriends house. He promised her that since his wife is out of town for the weekend that he would take her out clubbing tonite. When Kyra arrives, she sees that he is still sitting on the couch, not ready, and playing video games. She asks if he is ready to take her out, and he tells her that he just wants to stay in tonite and play his games.

Kyra is furious. She has waited all week long to see him and even bought a new shiny outfit to wear. She yells at him and then she makes the mistake of telling him that maybe she will just tell his wife about his cheating on her..

He puts down his game controller and leaves the room. She thinks that he is finally listening, now that she had to threaten him. He returns a second later with a duffel bag. He grabs her and shoves her down onto and end table and pulls a length of rope out of the bag.

“Wait!! What are you doing to me?!” she shrieks as he binds her wrists behind her. She struggles to sit up, but he keeps his weight pressed down on her until the knots are tied. Next her pulls out a pair of black satin panties. “You see these? These are my wife’s panties” he says. “What are you gonna do with those?” she asks disgustedly. He wads them up and shoves them into her mouth. As he’s stuffing them in he tells her “I got these fresh out of the hamper. How do they taste?” She gags on the panties and shakes her head, but he grabs some wrap and tape and in a few seconds, her head is wrapped tight in the layers and she can’t push them out. “MMMMPPPPPHHHHHFFFFFF!!!!!!”

He grabs more rope and layers it around her upper body, above and below her tits, and over and around her shoulders. He yanks the table out from under her and lays her on the ground on her belly. He pulls her ankles up crossed behind her and ties them together tightly. Lastly, he slides down her spandex pants and pulls a rope around her waist. He yanks in up through her crotch and then passes it under her tied wrists, and down and around her tied ankles. He pulls it tight, contorting her into a strict hogtie, and then knots the rope up between her shoulder blades where she could never reach.

He stands over her tightly bound body. “There we are. Nice and snug. You want to threaten me? I’ll teach you a little lesson. Maybe I’ll go out on the town tonite and leave you here all tied up in your party clothes.” She tries to struggle, but the ropes are so tight she can hardly even wiggle. She yells at him to let her go, but the huge wad of panties taped in her face only let out garbled moans. “MMPPfffhh! MMMMPPhhhff!”

He walks upstairs and leaves her there to struggle and suffer. 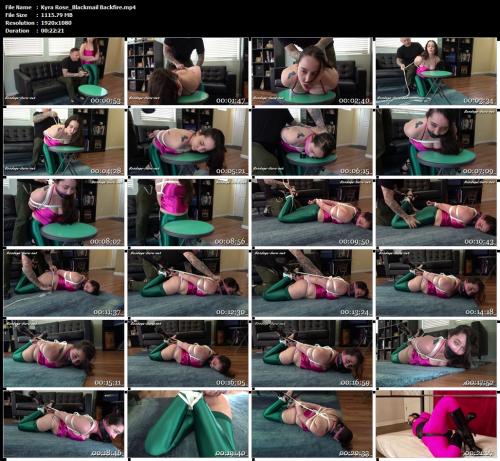